BOUNTY RECEIPT AND POWER OF ATTORNEY FOR VIRGIL DORSEY, CO. A, 30TH REGIMENT, UNITED STATES COLORED TROOPS, FOR HIS SERVICE FROM 7 FEB 1864 TO 16 JUNE 1866. DORSEY APPOINTS WM. COLTON & CO. OF BALTIMORE AS HIS ATTORNEY TO COLLECT, HIS BOUNTY OR BOUNTIES. SIGNED AND DATED 20 JUNE 1866. RECEIPT OF THE AMOUNT OF ONE HUNDRED DOLLARS FROM THE TREASURER OF THE STATE OF MARYLAND IS ACKNOWLEDGED BY COLTON ON 28 JUNE 1866 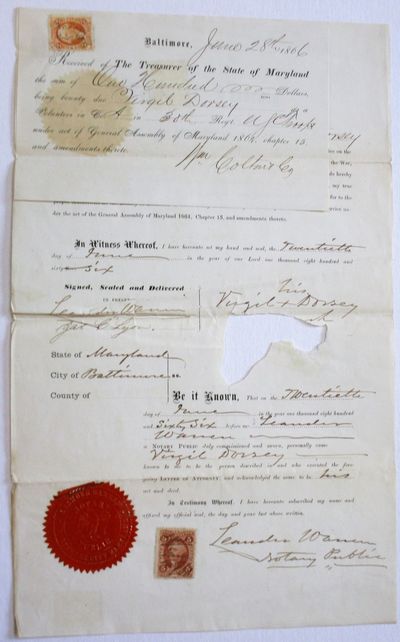 Virgil Dorsey [born c. 1845] was the slave of James J. Allnut, a farmer and planter living in Calvert County, Maryland. Dorsey enlisted with Company A, 30th Regiment USCT on 7 February 1864 for a three year term. His enlistment records describe him as a 19-year-old black farmer from Calvert County, Maryland. Allnut submitted a claim for compensation as owner of Dorsey under General Orders No. 329 on 23 February 1864. On 25 March 1864, Allnutt signed a Deed of Manumission and Release of Service freeing Dorsey. On 16 April 1864, Dorsey was transferred into the U.S. Navy. He was a landsman on the Steamship Massachusetts, a gunboat in the blockade of Confederate ports. After the War, Census records show Dorsey as married to Martha and working with boats as a scowman.
William Colton is listed in the 1864 Baltimore directory as a Property Agent and Collector. Leander Warner is listed as agent and Notary Public. James C. Lyon was a store clerk. (Inventory #: 36487)
$650.00 add to cart or Buy Direct from
David M. Lesser, Fine Antiquarian
Share this item
David M. Lesser, Fine Antiquarian Books LLC
Offered by