A VINDICATION OF THE GOVERNMENT OF NEW-ENGLAND CHURCHES 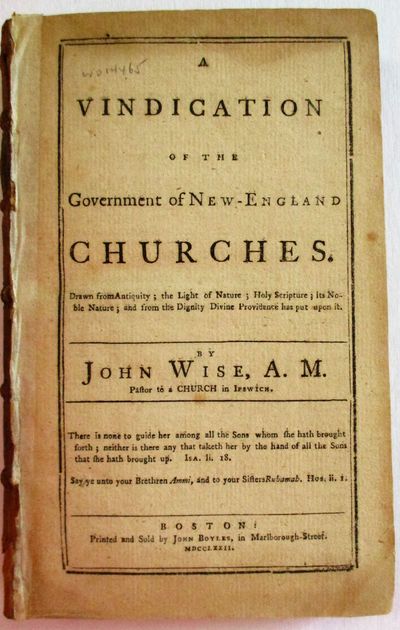 As issued, the book is bound with the separately paginated following titles: Wise, John: THE CHURCHES QUARREL ESPOUSED; and [Mather, Richard]: A PLATFORM OF CHURCH DISCIPLINE. This is one of 500 copies, as Boyles' notes 'to the world' make clear at the end. Evans says it "was quickly subscribed for."
It was preceded by the first edition of 1717, and reprinted in a more common edition later in 1772. "The most authoritative defense of Congregational polity, recognized as such even in law courts" Howes [incorrectly dating this edition 1722]. Wise argues that the church derives its power from the congregation, not from its ministers. The Proposals by a group of Boston clergy that Associations of Ministers should rule, he says, "smells so strong of the Pope's Cooks and Kitchen...that they are enough to strangle a Freeborn Englishman." "His writings were remarkable expositions of the foundations of government from the democratic point of view, written so attractively and powerfully as to be veritable trumpet blasts of liberty" [DAB]. His works in this edition, with their obvious application to the political struggle with England, "were reprinted as sources for language and arguments in the controversy then raging" [Id.]
Howes W595, W594. Evans 12625. XX DAB 427. Grolier American 100, 7. Minor Mathers 51-K. Streeter Sale 667 [ref.]. (Inventory #: 36585)
$500.00 add to cart or Buy Direct from
David M. Lesser, Fine Antiquarian
Share this item
David M. Lesser, Fine Antiquarian Books LLC
Offered by