HARRISON STATE CONVENTION. HAGERSTOWN, AUGUST 5, 1840. THE FRIENDS OF HARRISON & REFORM IN THE STATE OF MARYLAND, WILL HOLD A GENERAL CONVENTION AND FESTIVAL AT HAGERSTOWN, ON WEDNESDAY THE 16TH DAY OF SEPTEMBER NEXT.. 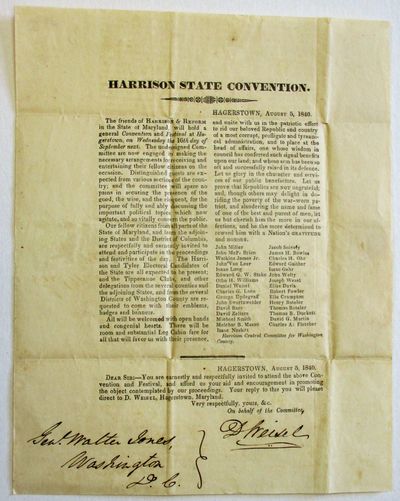 by [Maryland Whigs in 1840]
[Hagerstown?, 1840. Folded leaf, 7-3/4" x 9-5/8." Printed text on first page, in two columns, with names of members of the Harrison Central Committee for Washington County printed in type; above printed invitation: "Dear Sir:- You are earnestly and respectfully invited to attend the above Convention and Festival..." Signed in ink, D. Weisel, "On behalf of the Committee." Daniel Weisel is listed as a member of the Committee. At bottom left corner, in ink, is the name of the recipient: "Gen. Walter Jones, Washington D.C." Folded for mailing, addressed on last page to General Walter Jones, with Hagerstown postal cancel. Fold split on second leaf and tear from seal removal, without affecting text or manuscript. Very Good.

The Committee promises that "All will be welcomed with open hands and congenial hearts. There will be room and substantial Log Cabin fare for all that will favor us with their presence." We have not located any other copies of this rare item.
Daniel Weisel was a leading Maryland Whig, lawyer, and judge. He began his law "practice in Hagerstown and Williamsport. He established, and in connection with a most worthy printer, Mr. Tice, published for some years, at Williamsport, a Whig paper called the Republican Banner, which he conducted with great ability, and to which he was particularly devoted" [Website of Find A Grave]. The recipient, General Jones [1776-1861], of the District of Columbia, was president of the local committee to elect Harrison. He was a lawyer, soldier in the War of 1812, Brigadier General of the local militia by Monroe's appointment, and founding member of the American Colonization Society and the Washington National Monument Society. His father, Dr. Walter Jones, was a delegate to the 1788 Virginia Constitutional Convention. ['From James Madison to Walter Jones Jr., 20 July 1805," Founders Online, National Archives.]
Not located in American Imprints, Cronin & Wise [Harrison], Sabin, Eberstadt, or on OCLC or online sites of AAS, NYPL, Johns Hopkins, U MD, Harvard, Yale as of April 2020. (Inventory #: 36669)
$875.00 add to cart or Buy Direct from
David M. Lesser, Fine Antiquarian
Share this item
David M. Lesser, Fine Antiquarian Books LLC
Offered by


(click for more details about AUTOGRAPH LETTER SIGNED, FROM CLAIBORNE ALABAMA, 21 FEBRUARY 1865, TO GOVERNOR THOMAS WATTS, SEEKING ADVANCEMENT IN THE ARMY AS A BEAT COMMANDANT)

ODE ON THE MEETING OF THE SOUTHERN CONGRESS

[Charleston? 1861
(click for more details about ODE ON THE MEETING OF THE SOUTHERN CONGRESS)
View all from this seller>