AUTOGRAPH LETTER SIGNED, DATED JANUARY 12, 1855, AT "ISLAND", TO DR. BELL REGARDING NEGRO HIRE: "YOURS OF DEC. REACHED ME A FEW DAYS SINCE. IF MRS. J WOULD HAVE COME TO SOME CONCLUSION SOONER I COULD HAVE SOLD THE NEGROES BUT IT COULD NOT BE DONE FOR CASH IN THIS COUNTY, TIMES HAVE BECOME SO HARD THAT NO MAN CAN OR WILL INVEST THOUGH WE ALL KNOW THE ASKING PRICE FOR NEGROES IS HIGHER UNDER THESE CIRCUMSTANCES. I HAVE USED THE DISCRETIONARY FORM YOU HAVE GIVEN ME, AND HIRED THEM TO MR. HOFFMAN WHO WILL TAKE GOOD CARE OF THEM, AND PAY YOU PUNCTUALLY ... [signed] CHAS. C. STUART 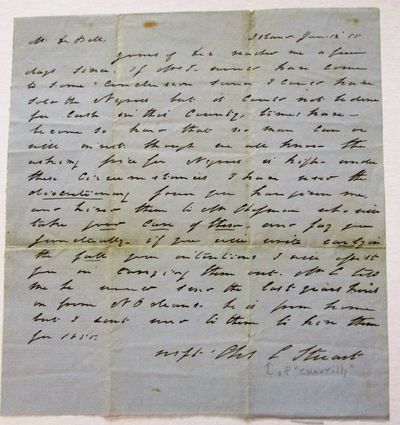 The writer was likely Charles C[alvert] Stuart [1818-1869], born in Chantilly, Virginia, son of Charles Calvin Stuart [1794-1846] and Cornelia Lee Turberville Stuart [1797-1883]. Cornelia was the granddaughter of Richard Henry Lee, signer of the Declaration of Independence.
The letter was probably written from "Stuart's Island," owned by the Stuarts and located on Old River Lake a/k/a Lake Chicot, Chicot County, Arkansas. Several months after the date of this letter, in August 1855, Charles Jr. sued his mother regarding division of his father's estate on Stuart's Island, including the plantation and slaves.
Stuart's Island was notorious for having been a hideout of the deadly John Murrell band of outlaws, who were involved with slave-kidnapping, robberies and other crimes. [BIOGRAPHICAL AND HISTORICAL MEMOIRS OF SOUTHERN ARKANSAS: Goodspeed Publ.: 1890, p.1065; Capace, Nancy: ENCYCLOPEDIA OF ARKANSAS, Somerset Publishers: 1998, p. 67.]. (Inventory #: 36652)
$500.00 add to cart or Buy Direct from
David M. Lesser, Fine Antiquarian
Share this item
David M. Lesser, Fine Antiquarian Books LLC
Offered by