AUTOGRAPH LETTER SIGNED, TO COLONEL BENJAMIN SHAW OF FRANKLIN, MAINE, FROM WASHINGTON, 14 FEBRUARY 1837, DESCRIBING POLITICAL MATTERS AND PRESIDENT ANDREW JACKSON AT THE END OF HIS PRESIDENCY 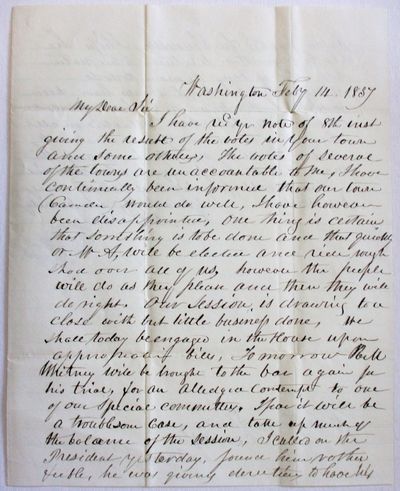 Joseph Hall was a Jacksonian Congressman from Camden, Maine during the 23d and 24th Congresses [1833- March 1837]. Hall's term in Congress ended with the close of Jackson's presidency. His letter to Shaw expresses frustration at recent election totals in Maine-- "The votes of several of the towns are unaccountable to me."
Hall discusses the pending contempt proceedings against Reuben Whitney, who refused to appear before a congressional committee in response to a subpoena. "It will be a troublesome case, and take up much of the balance of the Session." Whitney "was the man who more than any other became identified with pet banking," under which the federal government would place its deposits in various state, or "pet," banks. Whitney's association with, and agency for, the pet banks is described in detail in McFaul, THE OUTCAST INSIDER: REUBEN M. WHITNEY AND THE BANK WAR. Pennsylvania Magazine of History and Biography, pages 115-144 [1967].
"I called on the President yesterday, found him rather feeble, he was giving direction to have his papers packed for Tennessee. I hope he will be permitted to return to his native state, he is very anxious to do so. I regret that his health should have been so feeble at this session. He has had much to contend with, he has been attacked in all sides. He is however as firm as a rock and as honest in my opinion as any other man. (Inventory #: 36733)
$450.00 add to cart or Buy Direct from
David M. Lesser, Fine Antiquarian
Share this item
David M. Lesser, Fine Antiquarian Books LLC
Offered by