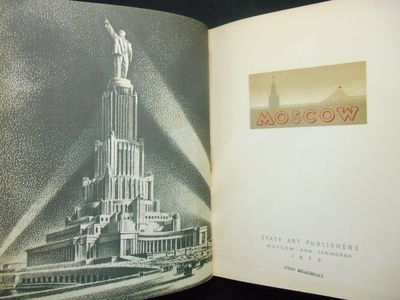 by [Rodchenko, Aleksander Mikhailovich; Stepanova, Vavara]
Moscow and Leningrad: State Art Publishers [Printed in the Soviet Union], 1939. Hardcover. Very good +. Quarto size, approx. 125 pp. A fascinating piece of Soviet propaganda published for the Soviet Pavillion at the New York World's Fair which opened in 1939, six months prior to the start of WWII. The Soviets spent a huge sum of money erecting three sites at the NY World's Fair, eager to show off to the rest of the world. As part of their overall efforts, they engaged the well-known artist Aleksander Rodchenko (1891-1956) and his wife Vavara Stepanova (1894-1958) to produce three photo-books: this work, "Moscow"; "Soviet Aviation"; and "A Pageant of Youth".

"Moscow" provide us a view of the USSR as they wished it to appear: full of happy, productive, and smiling men, women and children. The opening essay (uncredited) states in part: "Moscow is the vigorous spirit of creative labor which permeates the whole life of the city. Here are neither idlers, nor beggars, nor unemployed. In Moscow, as throughout the Soviet Union, all who work well are held in great esteem. The highest honors are bestowed on the best workers in all spheres...those who work best are honored most. Moscow is the most democratic capital in the world."

Following the opening essay the rest of the volume is a photobook, some pictures simply captioned, some with a few lines of text. We see parade grounds, groups of athletes, individual workers; Stalin is prominently shown in several photographs of leaders, shaking hands with workers, even inspecting a new car just off an assembly line; picture after picture of the improved Moscow with brand-new buildings, bridges, and subway stations; pictures of workers in different industries including automobile and railway; buildings devoted to education and research, with groups of well-fed, happy children. Tipped-in at the rear are two fold-outs roughly the size of postcards: one titled "Moscow of the Past" with ten reproductions of various drawings, paintings, or photographs showing the development of the city of Moscow over the centuries; the second titled "Buildings preserved by the Soviet Government for their historical value" with sixteen reproductions of photographs (several having two per panel) of "important" buildings.

___DESCRIPTION: Bound in maroon-coloured ribbed cloth covered with a leather-like material, the word "Moscow" embossed in horizontal stripes of maroon and gold on the front, the spine merely a series of gold horizontal lines, double-page pictorial endpapers of two large buildings (the Kremlin?) with fir trees in the foreground tipped with snow, off to the side a snowy square filled with people, frontis an image of a large building topped by a statue (Lenin?) pointing skyward with spotlights shining upon him, title page with the title in red against a small illustration in tan showing the silhouettes of two buildings, one surmounted by the Red Star and the other by a red flag, publishing information in grey (no mention of the authors), the half-tone illustrations after photographs presumably by Rodchenko in black and white with perhaps a tint of blue; quarto size (10 1/8" by 8 1/8"), unpaginated with approximately 125 pages, plus the two tipped-in fold-outs referred to above.

___CONDITION: Better than very good, with clean boards, straight corners with minimal rubbing, a strong, square text block with solid hinges, the interior is clean and bright, the sole prior owner marking being a small stamped name at the bottom of the title page; some light rubbing to the head and tail of the spine, the front board very slightly bowed, evidence of erasure of an old price at the top corner of the front free endpaper with a small crease to same, and some foxing to the edges of the final few pages. A better than very good copy of a fascinating glimpse into how the Soviet Union wished to be portrayed on the eve of the second World War.

___Swan's Fine Books is pleased to be a member of the ABAA, ILAB, and IOBA and we stand behind every book we sell. Please contact us with any questions you may have, we are here to help. (Inventory #: 20021605)
$385.00 add to cart or Buy Direct from
Swan's Fine Books
Share this item

History of Fayette County, Together with Historic Notes on the Northwest and the State of Ohio..

Dayton, Ohio : Odell & Mayer , 1881
(click for more details about History of Fayette County, Together with Historic Notes on the Northwest and the State of Ohio..)