Lives of the Necromancers: Or, An Account of the Most Eminent Persons in Successive Ages, Who Have Claimed for Themselves, or To Whom had been Imputed by Others, the Exercise of Magical Power 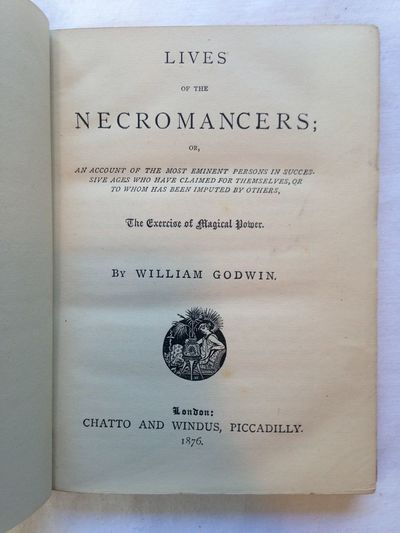 by Godwin, William
London: Chatto and Windus, 1876. First Edition. Quarter calf. Very Good+. First Edition. Quarter calf. William Godwin (1756-1836) was the famous radical journalist and author, husband of the feminist Mary Wollstonecraft, father-in-law of Percy Bysshe Shelley, and father of the author of "Frankenstein," Mary Wollstonecraft Shelley. Lives of the Necromancers was the final book written by Godwin and summarizes paranormal legends from western and middle eastern history. Although Scott's "Letters on Demonology and Witchcraft (1830) had prepared the public, Godwin's work was not widely reviewed. A long article, probably by David Brewster, in the "Edinburgh Review" lamented Godwin's failure to furnish 'any clue through the intellectual labyrinth of Necromancy' ... When it appeared in America a year later the master of the occult Edgar Allan Poe, however, took the opportunity in the "Southern Literary Messenger" to say that Godwin's name meant excellence and that his style was finished and graceful. The work was sufficiently in demand to be republished in New York... and in London in 1876." (Marshall). A definitive history of witchcraft and supernatural beliefs respectively, although critical of the Church's proceedings on the treatment of people prosecuted for witchcraft and a rationalist view of necromancy. Scarce edition rebound from the publisher's cloth. Rebound in red pebbled quarter calf, decorative floral gilt design to spine with raised bands, modern marbled boards, marbled end papers, tight, bright and unmarred, slight bumped corners, yet text is crisp and clean, an exceptional copy. 16mo, x, 282pp, includes decorative printer's mark and armorial bookplate of Francis Brooks. (Inventory #: 9460)
$2,400.00 add to cart or Buy Direct from
Lux Mentis, Booksellers
Share this item
Lux Mentis, Booksellers
Offered by

What Witches Do: The Modern Coven Revealed. with photographs by the author

New York : Coward, McCann & Geoghegan, Inc , 1971
(click for more details about What Witches Do: The Modern Coven Revealed. with photographs by the author)

Shadow Land, or Light from the Other Side

London : George Redway , 1897
(click for more details about Shadow Land, or Light from the Other Side)
View all from this seller>