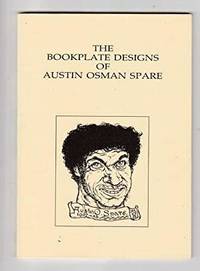 by Ansell, Robert
United Kingdom: The Bookplate Society in association with Keriwen Press, 1988. Limited Edition. Original Wraps. Near Fine in Wraps. Limited Edition. Original Wraps. Austin Osman Spare - One of the most recognized occult artists who elicited emotion under the occult umbrella. In a purposeful way, he left a legacy of existentialism, perhaps the macabre, but more so rather appropriated his psychic and magical abilities to conjure thought-forms to visible and tangible appearances. In this case of [artist] designer and collector, he's pretty singular, in that he illustrated the proportion of the power of belief into the sigils, by revealing the clarity of the image, which it evokes. This attests to an unusual example of how invocation manifests into the physical and transferred to print, in this case bookplates. These bookplates were designed between 1904-1945, for such folks as journalist Dennis Bardens and patron Pickford Waller. What is unusual here, but not out of the ordinary for a magician like Spare, is the element of confrontation. He's invoked a particular trait about his identity (however self-absorbed that he was) as a magician and infused it graphically into the design. This is something different than we might see in mass commercialization of the bookplate, which normally emphasize the collector, Spare has really infused his own likeness magically. His work illustrates, an aggressive fusion of magick and design. Near fine copy in original laid paper pictorial wraps. This edition limited to 500 copies; 330 for the Bookplate Society, and 140 only for private circulation, hand numbered and signed by the author, this being copy 10. Small 8vo, 35 pp. + illus. (Inventory #: 9752)
$275.00 add to cart or Buy Direct from
Lux Mentis, Booksellers
Share this item
Lux Mentis, Booksellers
Offered by

Practical Occultism: From the Private Letters of William Q. Judge

London, UK : Aeon Books Ltd , 2004
(click for more details about The Shadow Tarot)
View all from this seller>