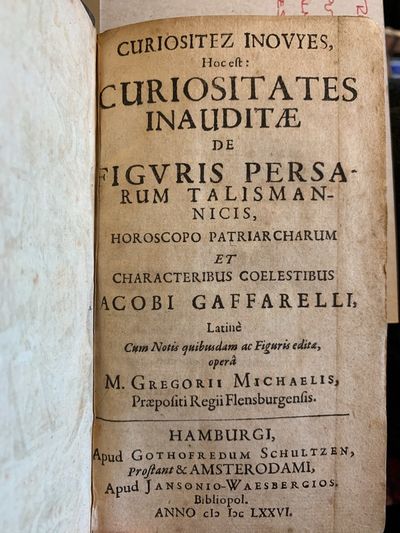 by Gaffarel, Jacques [1601-1681]; Michaelis,Gregorius [1625-1686] [editor]
Hamburgi; Amsterodami: Apud Gothofredum Schultzen; Janssonio Waesbergios, 1676. Later Edition/First Latin. Boards. Very Good+. Later Edition/First Latin. Boards. Jacques Gaffarel (Latin: Jacobus Gaffarellus) (1601-1681) was a French scholar and astrologer. He followed the family tradition of studying medicine, and then became a priest, but mainly developed his interests in the fields of natural history and Oriental occultism, gaining fluency in the Hebrew, Persian, and Arabic languages.
His most famous work is Curiositez inouyes sur la sculpture talismanique des Persans, horoscope des Patriarches et lecture des estoiles ("Unheard-of Curiosities concerning Talismanical Sculpture of the Persians, the horoscope of the Patriarchs, and the reading of the Stars), which was published in French in 1629 (and translated into English in 1650, by Edmund Chilmead). Jewish astrology developed independently from the mythology and star-gazing of the ancient Greek and Roman civilizations. Gaffarel included in his work two large folding plates of "the Celestial Constellations expressed by Hebrew characters", and asserted that the letters of the Hebrew alphabet could be interpreted from the constellations and that the heavens could be read as if a book.The book enjoyed phenomenal success. RenÃ© Descartes read this work with interest and the French physician and mathematician Pierre Gassendi (1592-1655) defended it. Unheard-of Curiosities was one of 1,500 books in the Library of Sir Thomas Browne and one of the varied sources of his encyclopaedia entitled Pseudodoxia Epidemica. Browne alludes to Gaffarel's astrology in The Garden of Cyrus thus: Could we satisfy our selves in the position of the lights above, or discover the wisdom of that order so invariably maintained in the fixed stars of heaven......we might abate.....the strange Cryptography of Gaffarell in his Starrie Booke of Heaven. Gaffarel contributed to the debate between Marin Mersenne and Robert Fludd. On the other hand, the Sorbonne rejected Gaffarel's work and ridiculed him; however, he gained the protection of the powerful Cardinal Richelieu, who made him his librarian and sent him off first to Italy, then to Greece and Asia to retrieve rare books (reportedly including manuscripts by Pico della Mirandola.
OCLC shows over 7 copies worldwide. First edition published in 1629. Rebound and trimmed in one quarter calf on boards, gilt spine bands, slight to moderate shelf/edge wear, bumped boards and light to heavy sporadic foxing. Translated into Latin from the French with Hebrew references. [110], 290 [i.e. 294], [1], 498, [48] pages, 30 unnumbered leaves of plates (some folded) : illustrations ; 17 cm (8vo), includes index. Includes added engraved title page. Errors in pagination: p. 62-65 (first sequence) repeated; blank verso of page 303 (second sequence) not assigned a number.
Bound with: M. Gregorii Michaelis ... Notae in Jacobi Gaffarelli Curiositates; has own title page with: "Hamburgi, apud Gothofredum Schultzen /1676." with printer's device. The "Notae" has separate pagination and register. With former owner ex libris on front endpaper. (Inventory #: 10270)
$1,500.00 add to cart or Buy Direct from
Lux Mentis, Booksellers
Share this item
Lux Mentis, Booksellers
Offered by

The Gaucho Martin Fierro ; adapted from the Spanish and Rendered into English Verse by Walter Owen with drawings by Alberto Guiraldes

Buenos Aires : Editorial Pampa , 1960
(click for more details about The Gaucho Martin Fierro ; adapted from the Spanish and Rendered into English Verse by Walter Owen with drawings by Alberto Guiraldes)

Entrails: the magazine of happy obscenities and captured dragons [V1 #2]

New York : Whisper Shit Press , 1966
(click for more details about Entrails: the magazine of happy obscenities and captured dragons [V1 #2])
View all from this seller>