Brimstone: A Journal of the Ancient Brotherhood of Satan Volume I - Number I -- Volume IV - Number IV 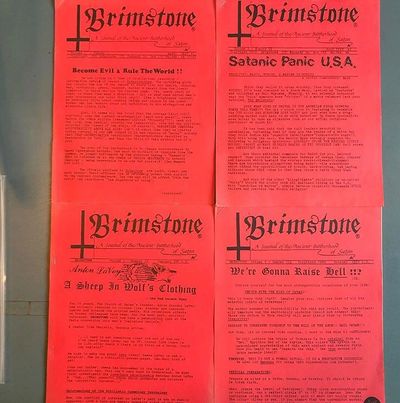 "John Dewey first joined the Church of Satan in 1970 and is today an Adept in the Temple of Set. Also known by his magickal name of The Daimon Egan, he is editor of Brimstone Quarterly, journal of the Ancient Brotherhood of Satan (ABOS). The purpose of ABOS is described as being to change consciousness by known ignominious methods, to restore Satans proud legacy and to resurrect His traditional role as The Adversary. To unleash all the Powers of Hell. Igniting chaos to achieve freedom from tyranny. ABOS follows the tradition of the early German order, the Fraternitas Saturni. Their philosophy is described as Nietzschean Thelemism." Includes correspondence, news, and much coverage of the conflicts between the Temple of Set and Anton LaVeys Church of Satan. The fourth issue, largely taken up with a critique of LaVey, includes an interesting passage on the relationship to the Situationists and Satanism. Also includes a letter to the editor from Ian Read from Chaos International, Sol Invictus fame and features of the art of Jeff Gaither, artist for the Misfits, Guns N' Roses, Van Halen, Insane Clown Posse, and GG Allin, including over 400 album covers. Scarce copies, did continue into a second volume. (Inventory #: 10304)
$350.00 add to cart or Buy Direct from
Lux Mentis, Booksellers
Share this item
Lux Mentis, Booksellers
Offered by

What It Means to Be a Witch and Astro Witchcraft

New York : Hero Press , [1974]
(click for more details about What It Means to Be a Witch and Astro Witchcraft)

Witches Liberation or, a True Witch Fights Back and Practical Guide to Joining a Coven

New York : WICA-Hero Press , [1970-1975]
(click for more details about Witches Liberation or, a True Witch Fights Back and Practical Guide to Joining a Coven)
View all from this seller>