Witches Still Live: A Study of the Black Art To-day 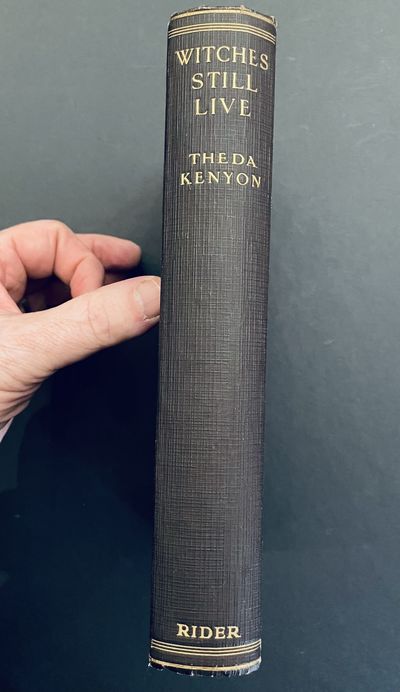 by Kenyon, Theda; illustrations by [William Siegel]
London: Rider & Co, 1931. First UK edition. Hardcover. Very Good+. Siegel, William. Siegel, William. First UK edition. Hardcover. Theda Kenyon, born on September 19, 1894, in New York, enjoyed a long life as a writer and lecturer. Although she was the daughter of an Episcopal priest and theologian, she is best known today for authoring a book on witches. And though her first name is an anagram for "death," she lived for over a century. An underrated, but surprisingly comprehensive and well-researched account. Early witchcraft work authored by a women, which topically is scarce. Tight and bright. Hint of rubbing to extremities, a few faint pale marks to buckram, and a slight ripple to buckram due to moisture. Page edges slightly foxed, pencil notations and annotations scattered through text. Overall, an outwardly visibly lovely copy. No dust jacket, presumably as issued or rebound, as other issues have different cloth. Blind ruled black cloth with gilt titling to spine, bibliography and index. Octavo. 285 pages. Illustrations throughout. (Inventory #: 9535)
$225.00 add to cart or Buy Direct from
Lux Mentis, Booksellers
Share this item
Lux Mentis, Booksellers
Offered by

Curses in Verses: Spelltime in Rhyme