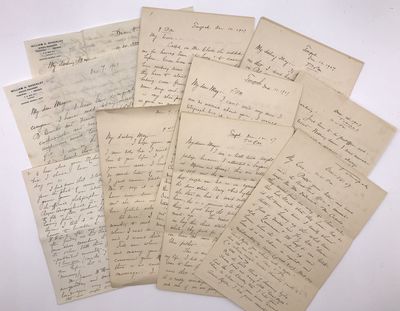 by Schockley, William H.
Tonopah, Nv: December 7 - 15, 1907. Very good.. Ten letters, totaling 85pp. Mostly octavo sheets. Old fold lines, minor wear. Most with original envelope. With modern typed transcripts. Series of letters written by mining engineer and surveyor William Shockley to his fiancee, May Bradford, over the course of the week following their engagement. May Bradford (1879-1977) was a Stanford graduate who worked in partnership with her father as a mining surveyor in Tonopah. She was later appointed Deputy U.S. Mineral Surveyor in Nevada and California. She met fellow mining engineer William H. Shockley while touring Europe in 1906, and the two married in early 1908. These letters record an intense depth of feeling between the two, and also highlight the unconventional and outspoken nature of the lady involved -- they are at times both ardent and not-entirely-subtle in their innuendo, and it is apparent from William's letters that her replies were equally so. He repeatedly implores her, "Love me! Love me!" and writes of his longing and desire. Writing on December 9th, he says, "Tell me something great in your letter, tell me we will be married soon and that after that we will be frank and loyal mates bearing with each other's imperfections and loving each the more for them. I kiss the inside of your elbow, that soft little white arm with the blue veins." William writes of his desire to travel with May to Mexico, asking her to send him a Spanish dictionary and phrase book so he can brush up on his language skills. He practices piano -- many German songs and composers -- and writes to her about her art, which she pursued alongside her scientific career. At points he mentions traveling with her to Germany and Java, and indeed the two spent time in Europe after they were married (their son was born in London in 1910). There are tidbits of everyday life in Tonopah, plans for their wedding and celebrations, hopes for the future, and some lines relating to the mines and work. By the end of the week, William is planning a visit to Palo Alto, and expresses his excitement. His final letter is signed "Your lover who longs for you." There are two telegrams at the end of the archive. The first, dated December 18th, reads, "Am on train will see you tomorrow with best wishes. William." The second, dated at Palo Alto on May 26, 1925, is from May to her mother. It indicates that William has had a fatal hemorrhage, and that he will be privately cremated the following day. Though not heavy on mining content, these letters remain relevant for their insight into the life of this unconventional and interesting woman, and for the man who wasn't afraid to be swept away by her. (Inventory #: 757)
$950.00 add to cart Available from
McBride Rare Books
Share this item