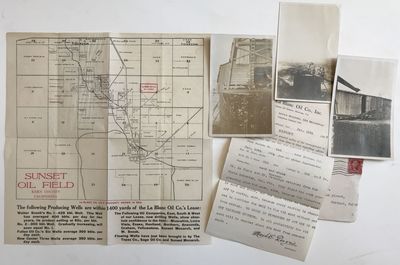 by [California]. [Oil]
[Oakland, 1909. About very good.. Six pieces, including three real photo postcards, typed letter, folding map, and transmittal envelope. Light creasing to images; light tanning to letter and map. Interesting promotional material for the La Blanc Oil Company for their developments in the Sunset Oil Field in Kern County, California in 1909. A folding plat map of the field near Maricopa, southwest of Bakersfield, shows La Blanc's holdings highlighted in red and a brief text touts the geographical relation to other producing wells. Also included is a typed progress report on the depth of drilling accomplished and the anticipated time before reaching the deposits, which assures investors that, "No doubt is expressed by any one of our ultimate success." The photo postcards show supposedly representative images of gushing oil pipes, overflowing oil barrels, and a very pleased group of men overseeing the scene. A nice group, with the original transmittal envelope addressed to an Edgar Bonnemort of Oakland. (Inventory #: 1289)
$375.00 add to cart or Buy Direct from
McBride Rare Books
Share this item