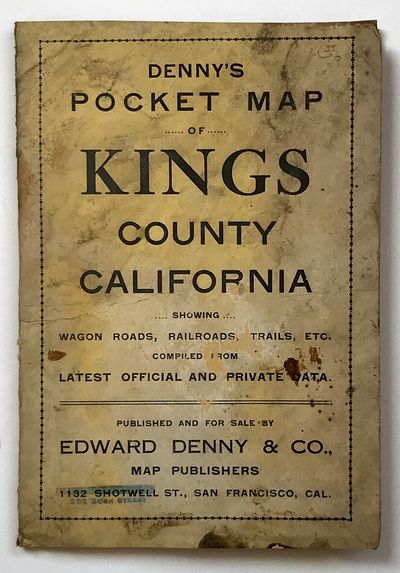 by [California]
San Francisco: Edward Denny & Co, 1912. About very good.. Folding map, 25.25 x 23.75 inches. Original printed wrappers. Some soiling and light wear to wraps. A couple very minor separations and losses along map folds. Light tanning. A scarce pocket map of Kings County, California, south of Fresno, published by Edward Denny & Co. in San Francisco. Printed in blue ink, the map shows the county divided into plat townships and delineates railroads, wagon roads, canals, streams, and oil pipelines, with a legend at left. Tulare Lake is prominently depicted at center, interestingly, with the original, larger lake lines also marked. The contraction of the lake was due to the diversion of the streams and rivers that fed it for agricultural purposes. Prior to this development, Tulare was the largest freshwater lake west of the Mississippi River. Denny produced similar maps for a number of California counties during the early 20th century, most now quite scarce. We locate only three copies, at the Huntington, Berkeley, and UC Davis. (Inventory #: 1272)
$675.00 add to cart Available from
McBride Rare Books
Share this item