You Can Judge a Book by its Cover: A Brief Survey of Materials 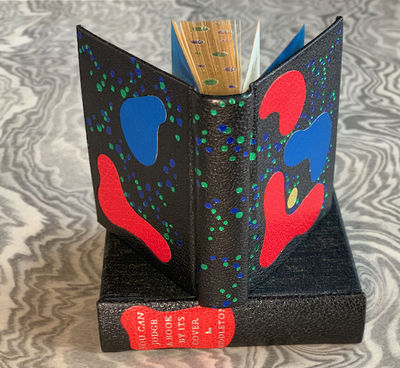 by Bernard Chester Middleton (1924-2019)
Pico Rivera, CA: Kater-Crafts Bookbinders, 1994. First Edition. Hardcover. Like New. John de Pol. Signed. Miniature Book. 2 15/16 x 2 7/16 inches. 163, [5 blanks] pp. Half-title, double-page title page printed in black and gilt, 6 wood engravings by John de Pol, gilt headpieces, headpiece and gilt rules at colophon; text clean, unmarked. Full black morocco with leather inlays and foil stamping of various colors, top edge gilt with various sized dots in 2 colors, marbled end-papers, housed in the original black-cloth clam-shell box with black leather spine, red leather spine label titled in silver, and lined with Japanese paper; binding square and tight. Glen Dawson's copy without distinguishing marks. SIGNED by 8 contributors on blank leaves at the rear. GKK220-002. Fine. LIMITED EDITION of 500 copies, 400 numbered copies for sale, this is number 58, edited by David Pankow, designed by Ward Ritchie, illustrated by John de Pol, typeset by Patrick Reagh, printed by Henry Morris of the Bird and Bull Press, and bound by Kater-Crafts Bookbinders from a design of Tini Miura, with endpapers by Einen Miura. SIGNED by 8 contributors on 2 blank leaves at the rear. The text of this book was used in the commission by Mel Kavin to have 33 design binders to produce their own interpretation of Bernard Middleton's text on book binding. The 33 design bindings now reside at the Julian Edison Department of Special Collections at Washington University in St. Louis, MO. The 33 volumes thus commissioned also became the basis for Mel Kavin's oblong 4to volume, A Catalog of the Thirty-Three Miniature Designer Bindings of You Can Judge a Book by its Cover, (1998). Bradbury records: "Mel Kavin published one miniature book under the imprint of Kater-Crafts Bookbinders, Pico Rivera, California. 'While attending an exhibition of miniature books in 1992, an inexplicable urge possessed me to publish one of my own, and it seemed only natural to ask those friends and acquaintances whose work I have so long admired and collected, to help turn my wish into reality,' Kater [sic] wrote. Ward Ritchie (Laguna Verde Imprenta) designed this miniature magnus opus while Henry Morris (Bird and Bull Press) printed it." Bradbury, pp. 112-113. REFERENCES: Bradbury, 20th-Century U.S. Miniature Books, No. 2077; Fraser & Fridl, John DePol, p. 66. (Inventory #: GKK220-002)
$450.00 add to cart Available from
John Howell for Books
Share this item