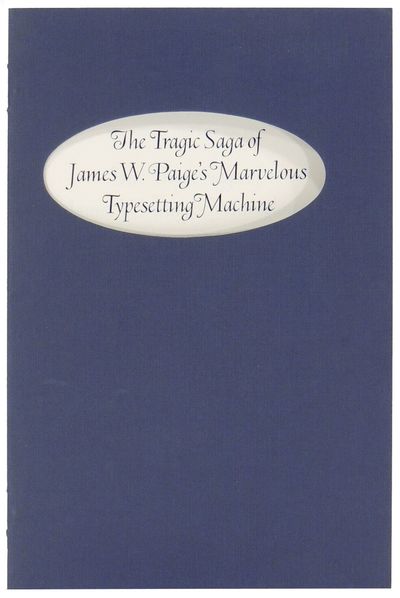 by [Hill & Dale Private Press and Typefoundry] Hopkins, Richard, author and printer
Terra Alta, WV: Hill & Dale Private Press and Typefoundry, 2014. Softcover. Near Fine. Softcover. Very scarce. Richard L. Hopkins is a leading authority on the Monotype and is proprietor of the Hill and Dale Private Press and Typefoundry. Hopkins originally wrote this piece for the Whittington Press's Matrix, published in 2014. After getting permission from the Whittington Press, he extensively reworked the manuscript for this production. He recounts the long and tortured history of James Paige's efforts to develop an automatic typesetting machine, starting in an era that still required the laborious process of setting type a letter at a time by hand. It is a fascinating story that directly involved Samuel Clemens, already famous as Mark Twain. Twain had worked in a printing house in his early days and was quite familiar with the labor and boredom involved in setting type. He was very interested in Paige's invention and invested a great deal of money for its development, which was ultimately lost as Paige's machine was overshadowed by the Mergenthaler's Linotype machine. Mergenthaler ultimately bought out Paige. There is a stunning image of Paige's marvelous machine. There were only two ever built. One is currently on display at the Mark Twain Museum. The other was donated to Cornell University but was donated by them to a scrap metal drive during World War II. Hopkins printed the machine's image via offset - the rest of this book is letterpress. The image is reproduced on a two-page spread and clearly shows its intricacy and beauty. The machine was 7 feet tall, 11 feet long and 3+ inches deep. It weighed 7,550 pounds. Bound in a stitched dark blue paper cover with an oval opening showing the title on the half-title. Measures 8.75 x 13 inches. In near fine condition. Laid in is a note from Hopkins to printer Roland Hoover thanking him for his help. 15 pages. PRI/042220. (Inventory #: 34003)
$150.00 add to cart or Buy Direct from
Kelmscott Bookshop
Share this item