Four Reproductions of Type Specimen Broadsides of the Eighteenth Century: Two by William Caslon, London; One by Alex Wilson and Sons, Glasgow; and Another by the University Printing House, Oxford 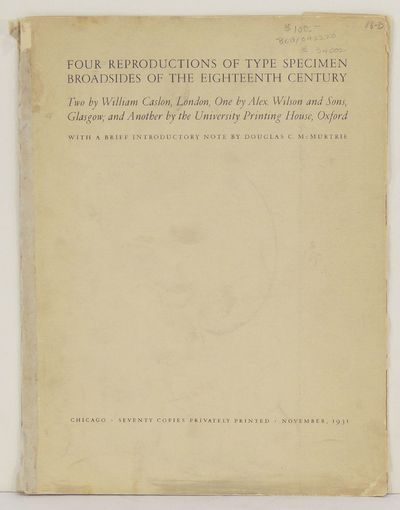 by McMurtrie, Douglas C., introductory note
Chicago, 1931. One of seventy copies privately printed. In the introduction McMurtrie writes: "There are here reproduced in considerable reduction four specimen broadsides of the eighteenth century English typefounders. Perhaps the principle motive responsible for their reproduction is a desire to call to mind this delightful form of showing typefaces, so often resorted to by typefounders of an earlier day but now - regrettably - become almost obsolete." He continues to say that the sheets of most importance to the typographic historian are probably the two issued by the Caslon foundry. The originals of both may be found in the Bodleian Library. He points out that the Oxford University Printing House, now the Oxford University Press, displays the wide range of languages for which types were available - a testament to the interest of the house at that time in scholarly printing and publishing. The four broadsides are held in a paper wrapper that has experienced much wear, with the covers barely attached. The broadsides are in very good condition. Broadsides measure 9 x 12 inches. BOB/042220. (Inventory #: 34002)
$100.00 add to cart or Buy Direct from
Kelmscott Bookshop
Share this item

Eight leaves from The Earthly Paradise

Hammersmith : Kelmscott Press , 1896
(click for more details about Eight leaves from The Earthly Paradise)
View all from this seller>