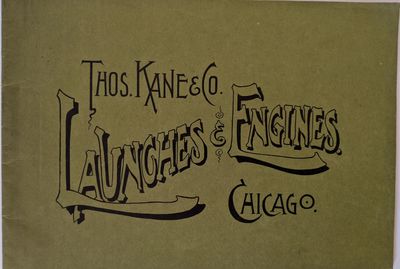 by (Trade Catalogue: Steam Launches)
Chicago, Ill., U. S. A.: Thomas Kane & Company, 1892. Oblong 8vo. 195 x 270 mm., [7 ½ x 11 inches]. 43 pp. Illustrated throughout with lithographs, many full-page images of launches and boating equipment. Bound in original green paper wrappers, title on front cover, vignette of a sailing launch on the back cover. Very good copy. Well-illustrated catalogue of launches and boiler engines produced in Racine, Wisconsin by the Thomas Kane & Company, who maintained a salesroom in Chicago. The company won a first prize for their steam boat launches, sail boats and row boats at the Columbian Exposition in Chicago in 1893. This catalogue issued the previous year illustrates many of the launches and boats that were part of the exposition and competition. Romaine, Guide to American Trade Catalogues, p. 66, listing catalogues for the years 1880, 1885, and 1893. Outing, an Illustrated Monthly Magazine of Sport, Travel, and Recreation. New York, Vol. XXIV, 1894, p. lxix. OCLC cites copies at Harvard and SMU. (Inventory #: 504)
$225.00 add to cart Available from
De Simone Company
Share this item
De Simone Company, Booksellers
Offered by