An Elk's Diary or, Behind the Horns [unpublished autobiography of a disabled man's travels]. 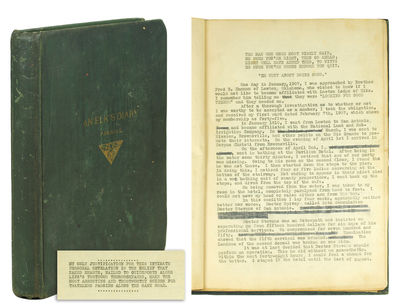 by Pannill, Henry C.
Oklahoma City: 1925. Typewritten manuscript (200 x 270 mm), 290 pp. printed on rectos only, bound in green cloth covered boards, backstrip plain, upper board titled in gilt "An Elk's Diary / Pannill", rear board blindstamped (upside down) "Behind the Horns / Henry Clay Pannill". Manuscript a little yelllowed but entirely legible and well preserved with all insertions and corrections secured in the original sturdy custom binding. § Unpublished typewritten manuscript, with many revisions, additions, deletions, and manuscript annotations, written or dictated by Henry C. Pannill a paralyzed man forced to travel over 40,000 miles around the country between 1910 and 1925 while seeking charity from Elk’s lodges and advocating for other disabled people. An autobiographical account of an extraordinary journey, the manuscript is also intended as an exposé of the hypocrisy and internal corruption of charitable organizations (specifically the Elks) and as a general lesson to the reader on the suffering and daily indignities faced by a physically disabled person in America at that time. Henry Pannill appears to have been born around 1887 in Oklahoma. In 1910 he made a misjudged dive from a second story balcony into a hotel swimming pool and was paralyzed from the neck down. As an Elk in good standing he applied to his home town lodge of Lawton, Oklahoma, for charity. After some initial kindness, the local lodge, unable or unwilling to support him further, sent him on to the lodge in Galveston, TX, a pattern that was to be repeated for the next 15 years, sending Pannill and his nurse along the length and breadth of the country. Disagreements between Elks, broken promises, and political wranglings lead to a succession of dramatic scenes: Pannill expelled from hotels and bundled in his wheelchair into the baggage car of trains against his will, Pannill invoking habeus corpus to escape from the Elk’s National Home in Virginia which he accused of murdering its “inmates,” Pannill disrupting the Elk’s national convention while campaigning for reform of their benevolent fund, Pannill accused of “faking” his condition and left starving, an arm’s reach from his meals. Many episodes are told in dramatic fashion, others are alluded to in the numerous transcribed letters that make up much of the 290 pages. These letters attest to voluminous correspondence between Pannill and many senior figures in the Order of Elks, as well as meetings with such figures as Elbert Hubbard of the Roycroft Press, Alexander Marky and other editors of Pearson’s Magazine, and Dr Harvey Cushing at Johns Hopkins. From the transcribed correspondence it seems he did achieve some fame in his time and it seems probable that records relating to him and his efforts to reform the Elk’s benevolent activities still exist in other archives, perhaps those of the Elk Lodges. A few contemporary newspaper accounts report Pannill’s accident and his travels, but no mention has yet been found of him in histories of the period and no biography has been written, a fact that seems extraordinary. As a first-hand account of a disabled person’s campaigning efforts for rights and recognition a decade before the Social Security Act, the manuscript is an important and extraordinary survival. It is rich in the details of Pannill’s peripatetic life, as well in reported conversations and transcribed correspondence. Pannill is careful to include names and dates as his goal is to document the hostility and prejudice he encountered and to acknowledge those who supported him. From his narrative he emerges as strong-willed, angry, and complicated individual, whose writings, as outsider history, surely merit serious scholarly attention. (Inventory #: 122842)
$3,750.00 add to cart or Buy Direct from
John Windle Bookseller
Share this item

A Study of Nature and Other Poems.

Leicester : The Dryad Press
(click for more details about The Dryad Writing Cards.)
View all from this seller>