Life of William Blake. With Selections from his Poems and Other Writings. A New and Enlarged Edition illustrated from Blake’s own Works. With additional Letters and a Memoir of the Author. 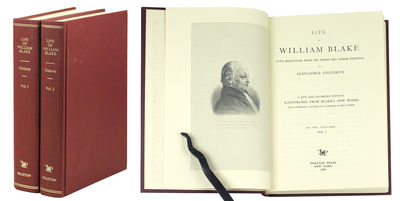 by Gilchrist, Alexander.
2 vols. London: Phaeton Press, 1969. 2 vols., 8vo, xvii, 431; ix, 383 pp., with a portrait frontispiece in each volume and numerous illustrations. Original red cloth, as new. § Facsimile reprint of the second and best edition. Bentley, Blake Books, 1680 H. Gilchrist was Blake’s first full-scale biographer and the only one who was able to interview Blake's surviving friends. The book was unfinished when he died suddenly of scarlet fever in 1861; his wife Anne helped to complete the Life, with help from Dante Gabriel Rossetti who wrote the final chapter from Gilchrist’s notes, and his brother William Michael Rossetti -- also A.C. Swinburne whose own book on Blake was the result of his researches when reviewing Gilchrist’s book. (Inventory #: 123274)
$90.00 add to cart or Buy Direct from
John Windle, Bookseller
Share this item

New Delhi : February 1949. Printed invitation on a letterhead sheet with typewritten additions
(click for more details about Original invitation and seating plan for a dinner held by the Jawaharlal Nehru, Prime Minister of the Dominion of India, on 23 February, 1949.)