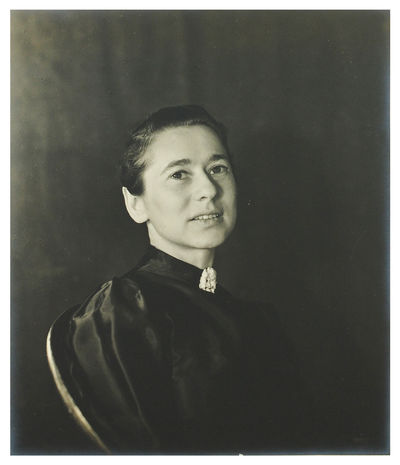 by Cunningham, Imogen.
Oakland, California: 1938. Photograph 6 1/8 x 7 1/4”, b&w gelatin silver print, mounted, signed and dated by Imogen Cunningham on the board beneath the lower right corner. With Imogen Cunningham studio sticker affixed to verso, board slightly foxed: very good. § Original print by Imogen Cunningham (1883-1976) widely acclaimed American photographer and founding member of the West Coast based group f.64, which were named for their un-manipulated or more straighforward approach to photography. Members included Ansel Adams, John Paul Edwards, Preston Holder and several others. Cunningham is best known for her work during the 1920s and 1930s, especially of close-up photographs of plants, nudes and portraits. Her portraits are highly prized and considered classics in photography, including images of Martha Graham and Alfred Stieglitz. Pictured is Lena Engst Thiriot, an Oakland physician. (Inventory #: 108179)
$2,000.00 add to cart or Buy Direct from
John Windle, Bookseller
Share this item

Borein's West: Leaves from the Sketchbook of the last artist of the Longhorn Era.

Santa Barbara : Press of The Schauer Printing Studio
(click for more details about Borein's West: Leaves from the Sketchbook of the last artist of the Longhorn Era.)
View all from this seller>