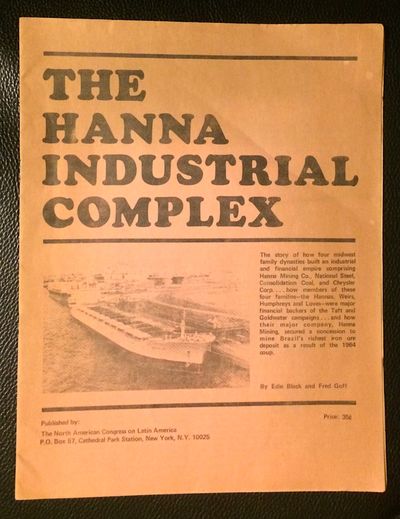 by Black, Edie and Fred Goff
New York: The North American Congress on Latin America, 1969. Pamphlet. 16p., wraps, 8.5x11 inches, illustrated with photos, figures, drawings and tables, minor wear. The story of how four midwest family dynasties built an industrial empire comprising Hanna Mining Co., National Steel, Consolidation Coal, and Chrysler Corp.; how the members of these four families, the Hannas, Weirs, Humphreys and Loves, were major financial backers of Taft and Goldwater; and how Hanna secured a concession to mine Brazil's richest iron ore deposit as a result of the 1964 coup. (Inventory #: 250166)
$15.00 add to cart or Buy Direct from Bolerium Books
Share this item