The Times Cook Book -- No. 2. 957 Cooking and Other Recipes by California Women 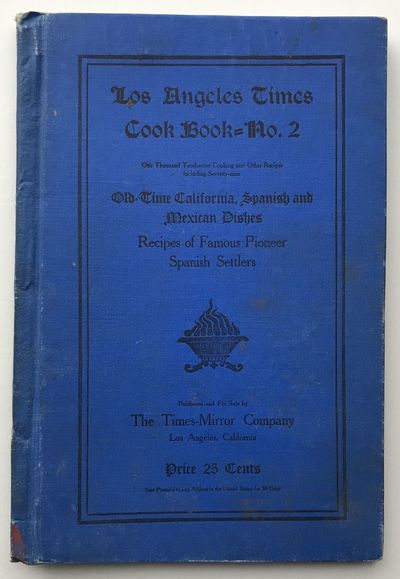 by [California]. [Cook Books]
Los Angeles: Times-Mirror Co, 1905. Good plus.. 105,[1]pp. Original printed cloth boards. Light wear to spine and edges; boards slightly rubbed, with minor soiling; front hinge. Title page somewhat browned; light tanning and soiling elsewhere. First edition, first issue (with "Price 25 Cents" printed on the front board) of this early 20th-century compendium of recipes, "brought out by the 1905 series of prize recipe contests in the Los Angeles Times." The recipes, all submitted by female readers of the newspaper, form an initial section of nearly eighty Americanized Mexican ("Spanish") dishes, including "tamale pie" and "Spanish sweet potato pone," as well as many subsequent sections for soups, salads, cakes, etc., and nine menus for picnic lunches. Oddly, there are ninety recipes for marmalade, but only twenty-four "ways of preparing vegetables." In nearly every instance, the name and address of the contributor is listed alongside her recipe. (Inventory #: 1356)
$350.00 add to cart Available from
McBride Rare Books
Share this item