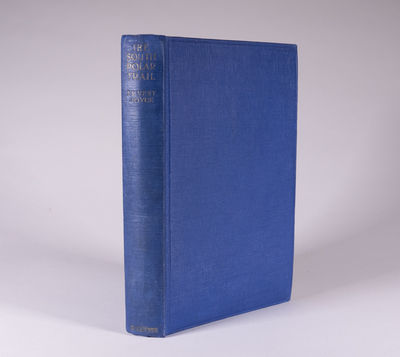 by Joyce, Ernest E.
London: Duckworth, 1929. First Edition. 8vo – 21.7cm. 220pp with frontispiece and 31 black-and-white photographic plates, errata slip and map mounted at page 31. In original blue cloth with gilt titling on spine. A very clean copy with crisp pages, no foxing, folds or tears, prior ownership name on ffe. A very good copy of a scarce and important book detailing Shackleton's Ross Sea Party struggle for survival and completion of their mission. Rosove 188.A1.a.
A diary-based narrative of the depot laying journeys of the Ross Sea Party on Shackleton's Trans-Antarctic (Endurance) Expedition. Joyce was awarded the Albert Medal for his bravery during the expedition and, in total, visited the Antarctic for four expeditions. The South Polar Trail is the principal firsthand account of the Ross Sea shore party of Shackleton's 1914-17 expedition. This book is also a very good read.
Joyce was forthright, courageous, and tenacious of purpose; he was not given to fanfare, but rather discharged his duties capably and quietly. He emerged strong and respected among the ten marooned men, assuming moral leadership when Aeneas Mackintosh was disabled and again after his death. Most of Joyce's narrative is a recitation of his journals. Joyce was not concerned with literary style, and his story is generally told in the simplest of terms. He could nevertheless communicate the drama of the moment. For example, during the six-day holdup for the blizzard on the return to Mt. Hope, the entire entry for 20 February is little over forty words – but cannot thousands be read between his lines: "Still blizzarding. Our position serious. Stores running out, the sick men not improving in their sleeping bags, the dogs weakening on account of being laid up: must halve their allowance. We are up against calamity: no kerosene for the Primus". -- The South Polar Trail p. 148. (Inventory #: MSTX.1119)
$650.00 add to cart Available from
Chet Ross Rare Books
Share this item
Chet Ross Rare Books
Offered by

Boston : Houghton, Mifflin & Co. , 1883
(click for more details about Voyage of the Jeannette The Ship and Ice Journals of George W. Delong, Lieutenant-Commander U.S.N., and Commander of the Polar Expedition of 1879-1881)
View all from this seller>