Report of the Cruise of The U. S. Revenue Cutter Bear The Overland Expedition for the Relief of the Whalers in the Arctic Ocean, from November 27, 1897, to September 13, 1898 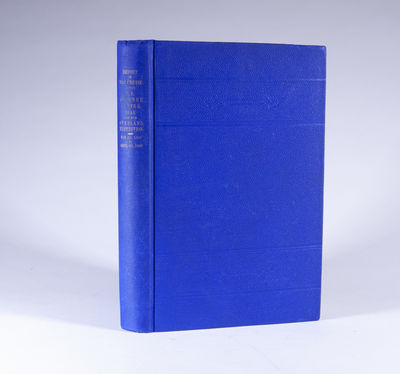 by Jarvis, D.H., Lieutenant
Washington: Government Printing Office, 1899, First Edition. Tall 8vo. 23.2 cm. (iv) 144pp., 68 black-and-white photographs and engravings, large fold-out color map at rear. Publisher's blue ruled pebbled cloth with gilt title on spine. Scarce. An important association copy gifted by Jarvis to A. P. to M.E. Swineford, Governor of Alaska. Arctic Bibliography 18402; Ricks p. 241; Wickersham 7604.
"Following the direct intervention of President McKinley, The Bear was equipped, and in November 1897 set out to rescue eight whaling ships which had become trapped in the ice near Point Barrow. Despite the difficulties involved in a winter mission to Arctic waters, the "Bear" and her crew managed to reach Seattle ten months later with four of the whaling crews, with no loss to its own complement of men." This book documents the account of the cruise of the "Bear" in 1898 to Cape Vancouver, West Alaska, landing a party under the command of Lt. D. H. Jarvis to go overland to Pt. Barrow to rescue whaling crews stranded in a sudden early Arctic freeze. The Jarvis party ultimately sledged to Seward Peninsula, purchased several hundred reindeer; then herded the reindeer across Kotzebue Sound, by the Kivalina and Meade Rivers to Point Barrow to feed the whalers — a truly remarkable feat that ultimately was successful in rescuing all whalers. Includes texts of orders and letters, descriptions of traveling conditions and regions traversed, the Eskimos, the purchase, care and dispensing of relief, including the reindeer. This amazing expedition covered over 1500 miles during the Alaskan winter. All whalers were saved in the remarkable achievement. The three-man expedition consisted of Lt. D.H. Jarvis, 2nd Lt. E.P. Bertholf and Surgeon S.J. Call. Lt. Bertholf later went on to become the first commandant of the United States Coast Guard.
With: a single page letter to the governor of Alaska, M.E. Swineford, and signed by Jarvis dated Nov. 23, 1903 pasted down inside the front cover. Swineford served as Governor of the District of Alaska from 1885 to 1898. Swineford also authored "Alaska: Its History, Climate and Natural Resources," published 1898. He died in Juneau, 1909.
Graphite corrections in Jarvis's handwriting in photo caption opposite page 11. (Inventory #: NCTX.1019)
$1,800.00 add to cart Available from
Chet Ross Rare Books
Share this item
Chet Ross Rare Books
Offered by

by Keiichi Tada, aka: Haruki Tada

Cruise of the 'Pandora' Extracts from the Private Journal Kept by Allen Young, R.N.R., F.R.G.S., F.R.A.S., &c., Commander of the Expedition.

London : William Clowes , 1876
(click for more details about Cruise of the 'Pandora' Extracts from the Private Journal Kept by Allen Young, R.N.R., F.R.G.S., F.R.A.S., &c., Commander of the Expedition.)
View all from this seller>