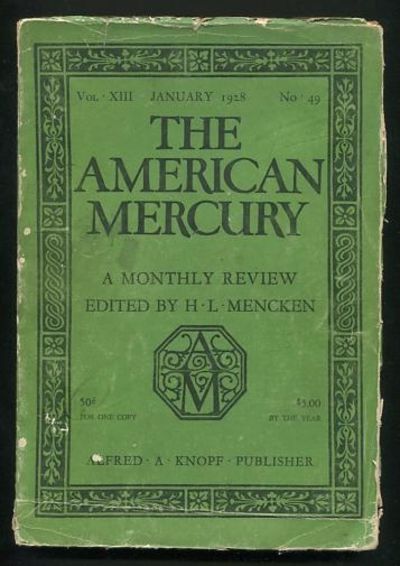 by Mencken, H.L., ed.; contributions by James M. Cain, Sinclair Lewis, Jim Tully, and others
New York: The American Mercury, Inc.. Good. 1928. (Vol. XIII; No. 49). Periodical. [Good only, with heavy external wear, rubbing/scuffing/soiling to covers; internally clean]. If any issue of The American Mercury can be described as "literarily star-studded," this would probably be it, with contributions from Sinclair Lewis ("The Man Who Knew Coolidge"), Jim Tully ("A California Holiday"), and a relative newcomer to the scene, James M. Cain. Cain's contribution, "Trial by Jury," was only the fifth time his work had appeared in the Mercury, and like the previous pieces (usually referred to as "dialogues") it took the form of a brief dramatic playlet -- in this case on a serious topic, the trial of a man accused of murdering a Ku Klux Klansman. Jim Tully was already a well-established literary celebrity at the time and his ironically-titled article here is one of his most famous, recounting his visit to San Quentin prison, where he witnessed an execution by hanging. The Lewis story, "The Man Who Knew Coolidge," was actually the first section of his novel (of the same name) that would be published in April of that year. Also in this issue: Mencken's editorial, on the subject of lawyers. ("The sad thing about lawyers is not that so many of them are stupid, but that so many of them are intelligent. The craft is a great devourer of good men; it sucks in and wastes almost as many as the monastic life consumed in the Middle Ages.") There's also a longish article about the work of James Branch Cabell, by the novelist Joseph Hergesheimer, as well as theatre criticism by George Jean Nathan (discussing the theatre of Max Reinhardt, John Galsworthy's "Escape," and "'Coquette' and the Sex Plays"); and an article, "The Railroads at Bay," by Charles Angoff. . (Inventory #: 25491)
$20.00 add to cart Available from ReadInk
Share this item
ReadInk
Offered by