Letters from the Orange Empire 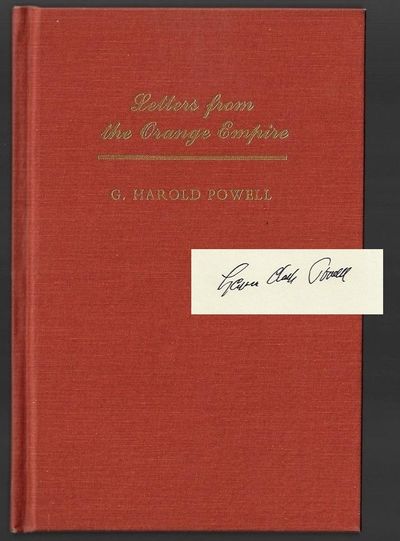 by Powell, G. Harold; Powell, Lawrence Clark [SIGNED]
Los Angeles: Historical Society of Southern California, 1990. First Edition. Hardcover. Fine. 142 pp, with color frontispiece and b/w plates. Signed by Lawrence Clark Powell on the limitation page. One of 600 copies issued, of which 100 were signed and bound in Brown cloth. This appears to be one of the 250 "regular copies," as it is bound in orange cloth (unless this is someone's strange idea of brown), but it is signed nonetheless. Fine copy. Includes a section on "the 'Powell Era' in the California Citrus Industry," followed by "Harold Powell's letters from Southern California" and "Harold Powell's letters from California and the West in 1909." (Inventory #: 20976)
$30.00 add to cart or Buy Direct from Walkabout Books
Share this item