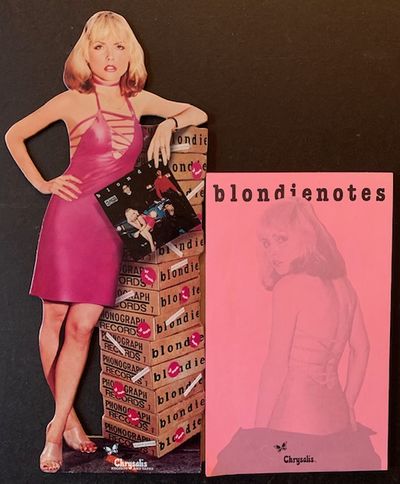 London: Chrysalis Records, 1977. Cardboard covers. Near Fine. Very scarce promotional stand-up cardboard cut-out and notepad ("Blondienotes"), featuring Debbie Harry and created for the release of Blondie's second studio album, "Plastic Letters" (December 1977, UK label Chrysalis Records). The cut-out, measuring 12 1/8" high, presents Debbie Harry sporting a strappy fuscia dress, and the notepad's Barbie-pink pages feature her coquettish gaze. A life-size version of this cut-out was featured in the 1982 film "Fast Times at Ridgemont High", where character Mike Damone uses "Debbie" as a prop while describing his five-point plan for getting girls. The dress Harry wears was designed by Taiwanese-American designer and dominatrix Anya Phillips, who died of cancer in 1981 at age 26. About Phillips, Debbie Harry said, "She was a powerful energy source that's now missing from the scene, an example of how intense willpower is charisma" ("Making Tracks"). Both pieces of promo ephemera are in Fine condition. (Inventory #: 18045)
$1,250.00 add to cart or Buy Direct from Appledore Books
Share this item
Appledore Books
Offered by

Tacoma and Seattle : Museum of Glass and University of Washington Press , 2009
(click for more details about Preston Singletary: Echoes, Fire, and Shadows)

Nightstand Books , 1961
(click for more details about Sex Pawn)
View all from this seller>