Wolsey the Cardinal, and His Times; Courtly, Political, and Ecclesiastical 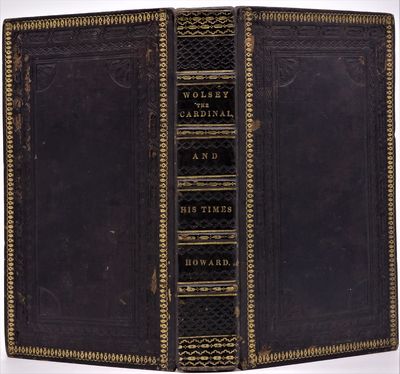 by Howard, George
London: Printed for Sherwood, Jones, and Co., 1824. Title vignette (coat of arms). xv, 590 pages, 1 leaf frontispiece (portrait), illustrations. Biography of Thomas Wolsey, born c. 1475, made cardinal 1515, Henry VIII's lord chancellor, and from 1515-1529 Wolsey's rule in foreign affairs was near-complete. Unable to arrange an annulment for Henry's marriage to Catherine of Aragon, and unpopular with those around Anne Boleyn, Henry's proposed new bride, Wolsey was arrested near York in November 1530 and accused of treason. He died on 29 November of the same year as he was traveling to face trial. Very Good plus in unsigned contemporary fine binding of black morocco, the back with five raised bands and gilt rules and lettering and blind tooling, the covers with gilt chain decoration bordering intricately blind tooled decorations, the page block edges stained brown, edges of covers gilt. The armorial bookplate of the private library of Thornham Hall front paste down. Very Good Plus, light rubbing to morocco, toning at edges of paste downs, internally quite clean and bright. Uncommon in lovely tooled binding of the time. . First Edition. Morocco. Very Good Plus/No Jacket, As Issued. 8vo - over 7¾" - 9¾" tall. (Inventory #: 008182)
$300.00 add to cart Available from
Dale Steffey Books
Share this item
Dale Steffey Books
Offered by

New York : Julian Messner , 1941
(click for more details about The Sight of Marble and Other Poems (Association Copy with Pencil Drawing))
View all from this seller>