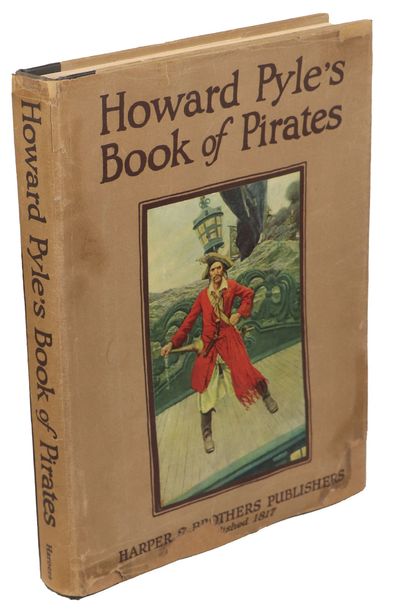 by Pyle, Howard; Johnson, Merle
New York: Harper & Brothers, 1921. First edition. Hardcover. Near Fine/Good. Folio. [12], xi-xvii, [3], 3-246, [6] pp.Tan paper-covered boards quarter bound in black cloth with gold lettering on the spine, black lettering and a color pictorial inlay to the front board; top edge stained orange. Color Frontispiece (Pyle's painting "An Attack on a Galleon"), 11 additional color plates, 24 black and white plates, 1 small tipped in black and white illustration (page 3), 2 small tipped in color illustrations (pages 232 and 239) and numerous in-text and small decorative illustrations throughout. Price of $5.00 net on the front flap of the dust jacket. ADNB, Elizabeth Hawks, "Pyle, Howard". Over his 35-year career, Pyle carved a reputation for himself as one of America's most significant illustrators. He produced more than 3,000 illustrations for books and magazines, twenty books, and several articles. Pyle began as a children's book illustrator, and established new standards in American book-making with his designs, with William Morris among one of his numerous fans. Pyle was notably famous for his illustrations about pirates and historical adventure stories. He illustrated books by Robert Louis Stevenson, Oliver Wendell Holmes, and William Dean Howells. This book is a compilation of some of Pyle's work related to pirates and vividly demonstrates his style and his influential conception of pirate costume. An attractive example of this wonderfully illustrated book, decidedly uncommon in the dust jacket. A Near Fine book with light wear to the bottom edges of the boards and mild fading to the topstain in a Good only dust jacket with chipping, reverse inexpertly reinforced, and some small areas of discoloration. (Inventory #: 00008975)
$1,350.00 add to cart or Buy Direct from
Evening Star Books
Share this item