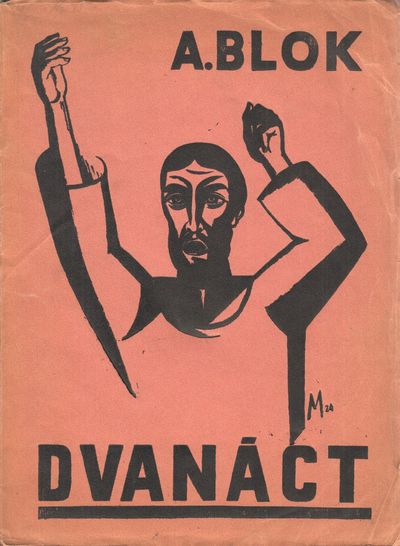 by Blok, Aleksandr; Bohumil Mathesius, translator
Prague: Plamja, 1925. Quarto (27 × 20 cm). Original pictorial wrappers; 47, [7] pp. Cover and seven full-page reproductions of ink drawings by Václav Mašek. Very good; wrappers lightly worn, with some fraying to overlapping edges, as usual. This 1925 Czech translation of Russian poet Aleksandr Blok's "The Twelve" ("Dvenadtsat'") features illustrations by the Czech avant-garde artist and illustrator Václav Mašek (1893-1973). Blok's epic poem (written in 1918) is translated by Bohumil Mathesius, a prolific translator from a number of European languages. Dvanáct is an example of the flourishing avant-garde print culture in 1920s Prague, when artists and writers radically re-thought the aesthetics of the book, experimenting with cover design, typography, illustration, and the relationship between word and image. Mašek, a relatively under-studied artist, was close to the Devětsil Artistic Union, a group of avant-garde Czech writers, artists, and designers who had strong artistic ties to the Russian and French modernist movements, as well as to the Russian theorist Roman Jakobson. Devětsil was both a political and aesthetic movement, with an "avowedly Marxist" orientation, closely following the artistic developments in the young Soviet Union. Blok was a Russian Symbolist poet, who in the "broken music" of this poem captures both the excitement and ambiv- alence of revolutionary upheaval. Mašek's bold and unsentimental black and white illustrations accompany his powerful verse, which, in Trotsky's words, is a "cry of despair" for both the "dying past" and "in hope for the future". Scarce in comparable condition. (Inventory #: P5097)
$350.00 add to cart or Buy Direct from
Bernett Penka Rare Books
Share this item