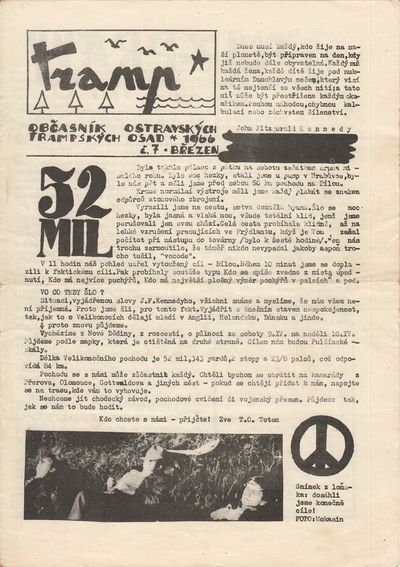 [Ostrava]: Tramp-MěV ČSM, 1966. Quartos (29.5 × 21 cm). Original duplicated (xeroxed?) typescript and illustrations to rectos and versos; 4-20 pp. each. Very good. Six early issues (including one larger issue spanning nos. 11-15) of this Czech journal of the "tramping" movement shortly before the Czechoslovak Prague Spring of 1968. Tramping had developed in the 1930s as the local equivalent to the worldwide scouting movement, as well as a predecessor of Czech environmentalism. Its participants toured the Czech countryside with knapsacks and guitars, acting out a particular kind of counter culture viewed with suspicion by later governments, especially the Husák regime of the Normalization era. Tramping was heavily influenced by American culture, especially in its fascination with the Wild West, as these issues document, with mimeographed illustrations of Western landscapes, campfires, and saloons. Among the contributions are "tramp poetry," descriptions of hikes, and information about the group and its events. The journal was issued semi-illegally as a samizdat, and appeared irregularly from 1965 to 1971,after which it was revived in 1990. Not in KVK, OCLC. Not held by the Czech National Library. We can only trace the holdings at the Moravian Library in Brno. (Inventory #: P5123)
$450.00 add to cart or Buy Direct from
Bernett Penka Rare Books
Share this item