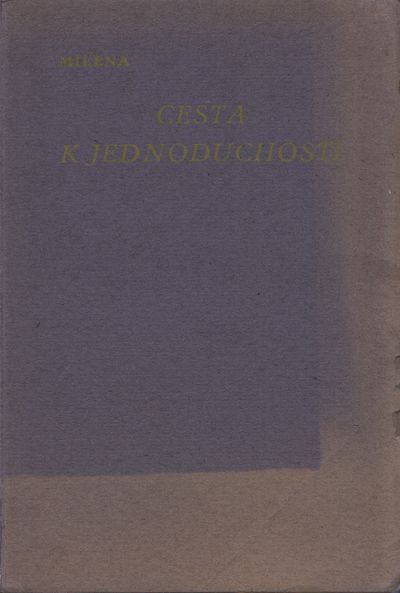 by Milena, i.e. Milena Jesenská
Prague: F. Topič, 1926. Octavo (19 × 12.7 cm). Original printed violet wrappers; 90, [3] pp. Wrappers lightly discolored and worn to lower right corner; else about very good. First and only edition of a volume of essays and newspaper editorials by Milena Jesenská, the journalist and translator best known for her intense, yet brief (and largely epistolary) romantic relationship with Kafka. Jesenská touches on questions about modern life, such as fashion and interior decorating, with a light style that occasionally resembles later "self help" writing. Curiously, she takes a somewhat conservative view of the "women's question" and female emancipation. Her book features a printed dedication to "my dear father" and was meant as a gesture of reconciliation with her estranged parents. The relationship was strained following Jesenská's liaison with the Bohemian Ernst Pollak: her father briefly committed her to a psychiatric clinic, after which Jesenská eloped to Vienna, where she also flirted with drugs and alcohol. It was during this unhappy marriage that she began to correspond with Kafka, who eventually broke off the contact, but entrusted her with his diaries in 1922. She later returned to Prague, where she married the Bauhaus architect Jaromír Krejcar and was close to the Czech avant-garde group Devětsil. The anthology was evidently the first volume of a projected series entitled "Žena" ("Woman"), which was to be edited by Milena but did not materialize. Jesenská later joined the Czech Resistance and died in the Ravensbrück concentration camp. KVK, OCLC only show the copies at the Czech National Library and the British Library (which featured the book on its European studies blog in August 2016). (Inventory #: P5807)
$750.00 add to cart or Buy Direct from
Bernett Penka Rare Books
Share this item


(click for more details about Parovyi verbliud [The steam camel])


(click for more details about Bulletin international du surréalisme. Mezinárodní buletin surrealismu. No. 1 (9 Avril 1935))
View all from this seller>