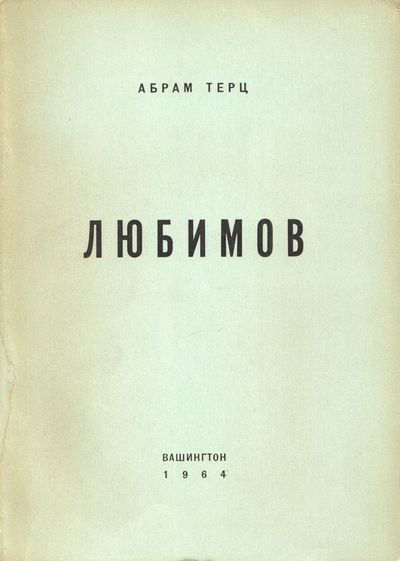 by Terts, Abram (Andrei Siniavskii, 1925-1997)
Washington, D.C.: B. Filipoff (printed by Rausen Bros, NY), 1964. Octavo (19.5 × 14 cm). Original light green printed wrappers; 166, [2] pp. A near fine copy, save for very minor toning to wrappers. First edition of this novella by Abram Terts (the pseudonym of Andrei Siniavskii), famous for his 1965 trial along with Iulii Daniel' (Arzhak), after which both were sentenced to a long prison sentence for publishing anti-Soviet works abroad. During the late 1950s and early 1960s, Siniavskii had managed to publish his works using his pseudonym in France and the United States, prior to being identified by Soviet authorities, which led to his arrest. Published, and with a preface by Boris Filippov (real name Filistinskii, 1905-1991), a Russian writer, critic, scholar and educator, who had fled the Soviet Union during WWII and was active in Russian DP circles in Germany before relocating to the US, where he became a professor of Russian. Filippov, who was rumored to have collaborated with the Germans and worked for the Gestapo, was considered a high profile target by the KGB, which actively hunted for him in Germany. It is still unclear whether any of the allegations are true. Copies in good condition are uncommon. (Inventory #: P002631)
$275.00 add to cart or Buy Direct from
Bernett Penka Rare Books
Share this item