Limb a jiné básně [Limbo and other poems] 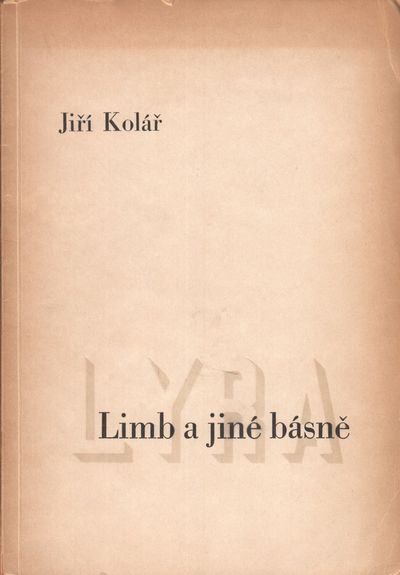 by Kolář, Jiří and František Gross, illustrator
Prague: B. Štýblo, 1945. Octavo (21.5 × 15 cm). Original decorative wrappers; 89, [6] pp. With three lithographs by František Gross. Signed and inscribed by Kolář on half title to the poet Vlastimil Fiala, in the year of publication. A very good copy; front wrapper very lightly discolored. First edition of these poems written by Kolář during the war, from late 1944 through 1945. With the appealing understated wrapper design of the Lyra series of poetry and three original lithographs by František Gross throughout. Overall design by Vít Obrtel. Second volume of the series Lyra (The lyre), edited by Josef Brož. A distinguished Czech artist and poet, Kolář (1914-2002) was the co-founder of the existentialist post-war group "Skupina 42" (Group 42) and ultimately became best known for his innovative collages. His period of visual experimentation began with an interest in concrete poetry in the 1960s, while part of the Kavárna Slavia group along with Václav Havel and Josef Hiršal. This copy inscribed to Vlastimil Fiala (1920-1993), a young poet, painter and art historian, who was evidently close to the surrealist poet Vítězslav Nezval and later served as an editor of his unpublished works. As of May 2020, KVK and OCLC show three copies in North America. (Inventory #: P6490)
$400.00 add to cart or Buy Direct from
Bernett Penka Rare Books
Share this item