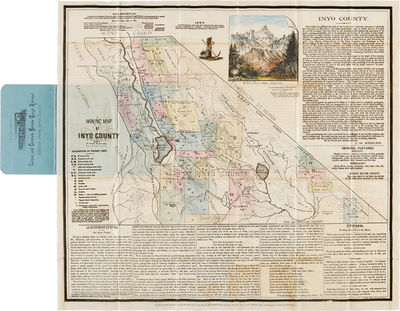 by Keeler, Julius M.
San Francisco: Lith. Britton & Rey, 1884. Colored lithographed map, 16 x 17 1/2 inches. Includes a colored illustration of Mount Whitney, as well as descriptive text. Folding into original printed paper wallet- style covers, printed advertisements on inner flaps. Fine. A scarce map of Inyo County in east-central California. The map promotes the mining potential and recreational beauty of the county, which abuts the Nevada state line and encompasses both the highest point (Mount Whitney) and the lowest point (Death Valley) in the continental United States. The map is the product of Julius M. Keeler, who came to California in the Gold Rush twenty-five years previous to the publication of this map, and who in the early 1870s relocated to the Owens Lake district in Inyo County, eventually founding the town of Keeler. The map includes a great amount of geographical detail. The various districts are individually colored and the various types of ores to be found are identified by letters corresponding to a key. For those foolhardy enough to consider cutting through Death Valley, it is noted that "emigrants perished here in 1850." The map and the accompanying text emphasize that gold and silver are still to be found in the county. The recreational aspects and natural resources of the area are promoted as well, describing the fishing potential of the lakes and rivers in detail, with attention paid to the Sierra Golden Trout. The view of Mount Whitney, from Lone Pine, is by Mollie Stevens, daughter of a local sawmill owner,

"Published to promote the potential mineral wealth of Inyo County and the recreational value of the eastern slope of the Sierra Nevada in the Mount Whitney region. The map names and defines the boundaries of the county's mining districts based on data provided by J.H. Crossman and several others acquainted with the area" - Currey & Kruska. The map was offered in three iterations: as a plain sheet on fine book paper for fifty cents; on linen paper, in cover, seventy-five cents; and colored, in covers, for a dollar. The present example is the most deluxe of the three options, colored and in covers. OCLC locates a total of five copies: at the Bancroft Library, Stanford, the Huntington Library, the California State Library, and at Yale. There is also a copy at the St. Louis Mercantile Library. Not in Rocq, though there is descriptive text of Inyo County.

MEMOIRS OF THE LIFE OF THE LATE CHARLES LEE, ESQ. LIEUTENANT COLONEL OF THE FORTY FOURTH REGIMENT, COLONEL IN THE PORTUGUESE SERVICE, MAJOR GENERAL, AND AID DU CAMP TO THE KING OF POLAND, AND SECOND IN COMMAND IN THE SERVICE OF THE UNITED STATES OF AMERICA DURING THE REVOLUTION...

London : Printed for J.S. Jordan , 1792
(click for more details about MEMOIRS OF THE LIFE OF THE LATE CHARLES LEE, ESQ. LIEUTENANT COLONEL OF THE FORTY FOURTH REGIMENT, COLONEL IN THE PORTUGUESE SERVICE, MAJOR GENERAL, AND AID DU CAMP TO THE KING OF POLAND, AND SECOND IN COMMAND IN THE SERVICE OF THE UNITED STATES OF AMERICA DURING THE REVOLUTION...)
View all from this seller>