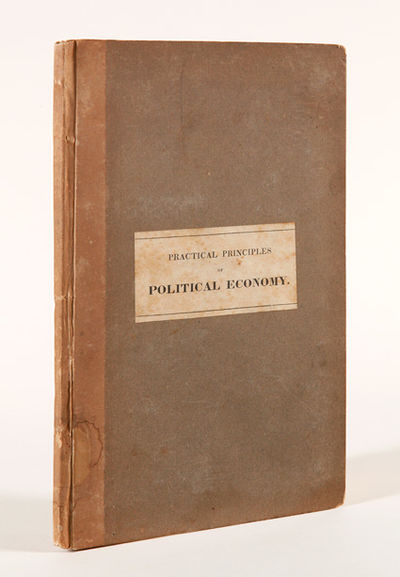 by [Cushing, Caleb]: [Putnam, Oliver]
Cambridge: Printed by Hilliard and Metcalf, 1826. 88pp. Original paper-covered boards with publisher's printed label on front board. Some wear and staining to boards, corners bumped, spine ends chipped. Bookplate of the Essex Institute (with release stamp dated 1967) and another bookplate on front pastedown. Occasional light pencil marks in margins, mild foxing and tanning throughout. About very good. Untrimmed. Only edition of this uncommon early work on American protectionism, or "domestic industry," by one of its most avid proponents, Caleb Cushing. As the American economy grew in the early 19th century, the question of protectionism versus free trade became a major issue in political and economic affairs. Cushing concludes that government and business should come together to form regulations that favor American companies employing American labor over and above foreign industry, which would both strengthen America's standing internationally and help resolve domestic economic inequality. Caleb Cushing (1800-1879) had a long and distinguished career in American public affairs. He explained that he composed the present work based on the incomplete research of his late friend, wealthy merchant and investor Oliver Putnam (1777-1826). He took Putnam's manuscripts, and "with additions and alterations of my own, I compiled a series of papers, which I published in the UNITED STATES LITERARY GAZETTE" (quoted in Fuess, Vol. 1, p.68). In the "Advertisement" to this work, Cushing explains that he republished these papers separately, to "supply a deficiency..." and that their purpose "is to give a plain exposition of economical principles adapted to our interest, not the interest of France, or of Britain, or of the British country gentleman, or of British stockholders" (p.4). The book is divided into three sections, the first giving a "Summary of the Practical Principles of Political Economy." The second part sets forth a strong critique of Adam Smith's WEALTH OF NATIONS, promising that "the friends of domestic industry, against whom the authority of Adam Smith has so frequently been urged, will find that nothing need be apprehended from his reasonings, when they are properly analyzed and examined" (p.45). Finally, he turns his attention to Jean Baptiste Say's TREATISE OF POLITICAL ECONOMY, calling it a rehash of Smith's work. Noting that Harvard had adopted it as the textbook for their course on political economy, Cushing writes that "it would be better to leave [students] uninstructed" than to give them Say's book (p.63). Cushing went on to have a political career that was as tempestuous as it was illustrious, due in large part to his substantial rhetorical abilities already evident in this very readable work. SABIN 93602. AMERICAN IMPRINTS 24272. GOLDSMITHS 24818.15. Claude M. Fuess, THE LIFE OF CALEB CUSHING (New York: Harcourt, Brace & Co., 1923). (Inventory #: WRCAM55498)
$750.00 add to cart or Buy Direct from
William Reese Co. - Americana
Share this item

THE NEGRO IN THE AMERICAN REBELLION. HIS HEROISM AND HIS FIDELITY

Boston : Lee & Shepard , 1867
(click for more details about THE NEGRO IN THE AMERICAN REBELLION. HIS HEROISM AND HIS FIDELITY)

LIVE STOCK LAWS OF THE TERRITORY OF NEW MEXICO RELATING TO CATTLE, HORSES, MULES, AND ASSES

by Barnes, Will C., [compiler]

Las Vegas, N.M. : Cattle Sanitary Board of New Mexico , 1905
(click for more details about LIVE STOCK LAWS OF THE TERRITORY OF NEW MEXICO RELATING TO CATTLE, HORSES, MULES, AND ASSES)
View all from this seller>