STATE OF LOUISIANA, EXECUTIVE DEPARTMENT, NEW ORLEANS, OCTOBER 29, 1863. GENTLEMEN: AN ADDRESS TO THE CITIZENS OF LOUISIANA WAS PUBLISHED YESTERDAY...PURPORTING TO BE SIGNED BY YOU, BY ORDER OF THE EXECUTIVE CENTRAL COMMITTEE OF LOUISIANA [caption title and beginning of text] 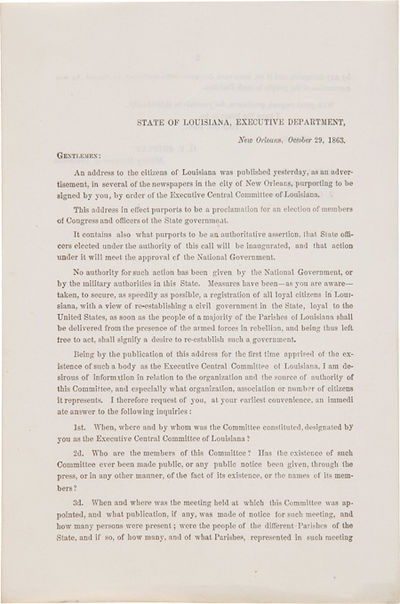 by [Louisiana]: [Shepley, George F.]
New Orleans, 1863. 2pp., printed on a folded quarto sheet. Faintest toning at bottom edge, else fine. An interesting New Orleans imprint encapsulating the tensions between Northern political forces and indigenous conservative political actors during the brief Free State movement in Confederate Louisiana. Here, George F. Shepley, military governor of Louisiana from 1862 to 1864, rebukes Conservative Unionists H.H. Pugh, E. Ames, and J.Q.A. Fellows of the "Executive Central Committee of Louisiana." They had issued what "in effect purports to be a proclamation for an election of members of Congress and officers of the State government." Shepley pronounces such a proclamation void, writing that "no authority for such action has been given by the National Government, or by the military authorities in this State." Further, Shepley demands the organizers of the committee answer a series of questions about the who, what, when, where, and why's of the committee's existence.

The Executive Central Committee in Louisiana was a conservative organization that sought to re-institute the original American Constitution in Louisiana (mainly to restore slavery), and lobbied Abraham Lincoln on the matter in the summer of 1863. Of course, Lincoln did not comply, siding with the more radical Free State Committee, and insisting on a new constitutional convention for Louisiana followed by new elections before Congress met in early December. The present document surely came about as a reaction to efforts by the Executive Central Committee to get their way before a new Constitution, based on eventual Reconstruction, the Emancipation Proclamation, and new elections, could be drafted and approved. Lincoln's efforts at a new constitution and elections for Louisiana continued into 1864, and came to fruition for a brief time, with new elections in late February and a new constitution ratified by public vote in September. This new political landscape for Louisiana was short-lived, however, as the U.S. Congress refused to seat the Louisiana delegation in December 1864.

Not in Jumonville or Thompson, and with no copies in OCLC. An illuminating entry in the brief Free State movement in Louisiana during the Civil War. (Inventory #: WRCAM55510)
$850.00 add to cart or Buy Direct from
William Reese Co. - Americana
Share this item