EXTRACTS FROM THE VOTES AND PROCEEDINGS OF THE AMERICAN CONTINENTAL CONGRESS, HELD AT PHILADELPHIA ON THE 5th OF SEPTEMBER 1774. CONTAINING THE BILL OF RIGHTS, A LIST OF GRIEVANCES, OCCASIONAL RESOLVES, THE ASSOCIATION...PUBLISHED BY ORDER OF THE CONGRESS 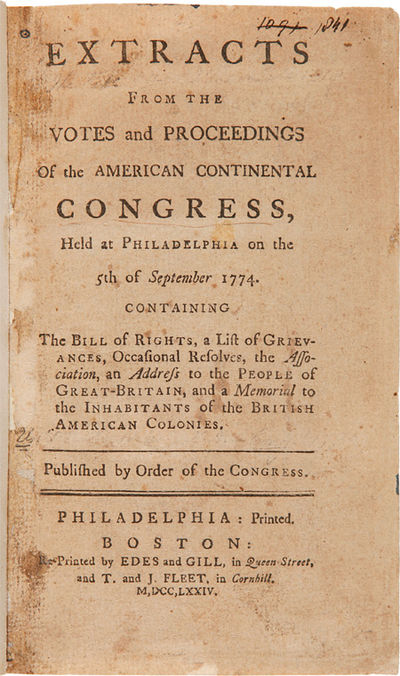 by [Continental Congress]
Philadelphia: Printed. Boston: Re-printed by Edes and Gill...and T. and J. Fleet, 1774. 56pp. Later buckram with gilt library stamp on lower left of front board, gilt leather spine label. Ex-Harvard library (Ebeling Collection), with withdrawal stamps on front pastedown and titlepage verso initialed in pencil "W.A.J." (William A. Jackson?). Bookplate of Israel Thorndike mounted on front pastedown. Some wear and ink annotations to titlepage, occasional foxing and tanning throughout. About very good. Uncommon Boston printing of one of the most significant documents of the American Revolution, condensing the most important proceedings of the First Continental Congress between September 5 and October 26, 1774. This publishes the Declaration of Rights, passed October 14, by which Congress asserts the colonists' rights as Englishmen and claims they were violated by the Stamp Act, the Townsend Act, the Coercive Acts, and the Quebec Acts. It further asserts their right to peaceably assemble and have their own legislatures. The Declaration is followed by the Association, by which the colonies bound themselves to an agreement regarding non- importation, non-exportation, and non- consumption of British goods, and resolved to reassemble the following May if wrongs had not been redressed. This is followed by two addresses, one to the people of Great Britain and the other to the inhabitants of the colonies, justifying the conduct of the Congress. These actions laid the basis for American resistance and organized rebellion which escalated into open warfare in the spring of 1775. Needless to say, the actions of the Continental Congress were of the greatest interest in the colonies, and these EXTRACTS... were published first in Philadelphia while Congress was still sitting. Printings followed in Albany, Annapolis, Boston, Hartford, Lancaster, New London, New York, Newport, Norwich, and Providence, all in 1774. This is one of several Boston printings from that year.

This copy came to Harvard through the generosity of merchant and politician Israel Thorndike (1755-1832). In 1818, Thorndike purchased the library of German scholar Christoph Daniel Ebeling, an expert in the history and geography of North America, and donated it to Harvard, substantially expanding library holdings and forming the core of the Harvard Map Collection. HOWES E247. EVANS 13729. ESTC W32254. SABIN 15528 (ref). REESE, REVOLUTIONARY HUNDRED 25 (ref). (Inventory #: WRCAM55494)
$3,500.00 add to cart or Buy Direct from
William Reese Co. - Americana
Share this item

TAXATION NO TYRANNY; AN ANSWER TO THE RESOLUTIONS AND ADDRESS OF THE AMERICAN CONGRESS

London : Printed for T. Cadell , 1775
(click for more details about TAXATION NO TYRANNY; AN ANSWER TO THE RESOLUTIONS AND ADDRESS OF THE AMERICAN CONGRESS)