IN THE HEART OF THE SIERRAS THE YO SEMITE VALLEY, BOTH HISTORICAL AND DESCRIPTIVE: AND SCENES BY THE WAY. BIG TREE GROVES... 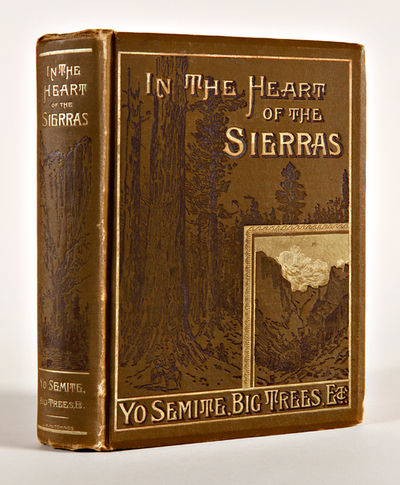 by Hutchings, James Mason
Yo Semite Valley and Oakland: Old Cabin and Pacific Press Publishing House, 1886. [4],496pp., plus two maps (one folding) and thirty-two plates. Frontis. Publisher's olive pictorial cloth, a.e.g. Bookplate on front pastedown, partially obscuring contemporary ownership inscription ("Olive S. Hale"). Newspaper articles about the death of J.M. Hutchings tipped in at front free endpaper and rear pastedown. Extremities rubbed, corners bumped. Closed tear in second map repaired with conservation tape (no loss to map). Quite clean and neat internally. Very good. This copy conforms to Farquhar's state "b" of the first edition, and Kruska's "second printing," with seven added plates. A classic description of Yosemite, by its most prolific early promoter, profusely illustrated with full- page photographs and other illustrations. The photographs include images by Taber, Geo. Fiske, S.C. Walker, et al., and are printed by Britton & Rey. This work "covers more fully than any other work of its day every aspect of Yosemite Valley and the Big Trees that could be considered of general interest to visitors. The illustrations are the finest that could be procured at the time" - Farquhar. This copy is from the collection of the noted adventurer and collector, Steve Fossett, the first person to fly solo nonstop around the world in a balloon and in a fixed- wing aircraft. Fossett disappeared in September 2007 during a solo flight over the Great Basin Desert, between Nevada and California. His remains were found in the Sierra Nevada mountains in November 2008. FARQUHAR 18b. KRUSKA, JAMES MASON HUTCHINGS OF YO SEMITE 98b. COWAN, p.299. CURREY & KRUSKA 175. ZAMORANO SELECT 50. REESE, BEST OF THE WEST 174 (note). (Inventory #: WRCAM55284)
$400.00 add to cart or Buy Direct from
William Reese Co. - Americana
Share this item