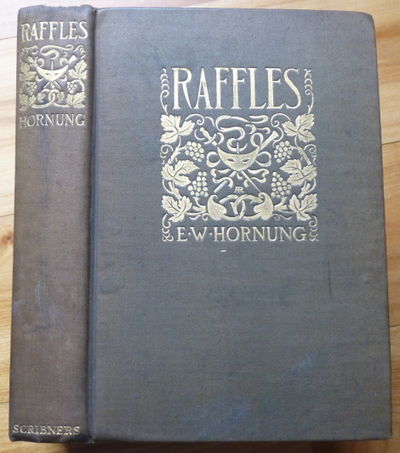 by Hornung, E[rnest]. W[illiam]
1901. Illustrated by F. C. Yohn. New York: Charles Scribner's Sons, 1901. Original olive green cloth decorated in gilt. First American Edition of eight further adventures that constitute the second "Raffles" book, following 1898's THE AMATEUR CRACKSMAN. One of the few fictional characters to rival Holmes in popularity was Raffles, a celebrated cricketer in the highest social bracket, apparently endowed with a considerable private income -- most of which was actually derived from the audacious burglaries he carried out with the aid of his faithful lieutenant Bunny [the narrator]... The author may well have borrowed the name of his gentleman-burglar from [his wife's brother A. Conan] Doyle's story, THE DOINGS OF RAFFLES HAW, 1892. [Quayle] Just as Doyle had killed off Sherlock Holmes in 1894 only to revive him for more adventures later on, so Hornung kills off Raffles (as a soldier seeking atonement in the Boer War) at the end of this book -- but stay tuned... This is a very good-plus copy of this attractively-bound book (an initialed binding design by Amy Richards); there is a touch of wear at the spine head, and as usual, minor mottled fading of this cloth. (Inventory #: 14527)
$115.00 add to cart or Buy Direct from
Sumner & Stillman
Share this item