A THIEF IN THE NIGHT. Further Adventures of A.J. Raffles, Cricketer and Cracksman 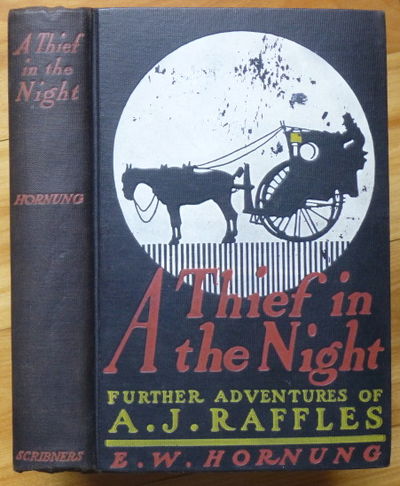 by Hornung, E[rnest]. W[illiam]
1905. With Illustrations by Cyrus Cuneo. New York: Charles Scribner's Sons, 1905. 4 pp undated ads. Original black cloth decorated in white, red and yellow. First American Edition of the third collection of adventures of Raffles, the gentleman crook. The first two collections had been THE AMATEUR CRACKSMAN of 1898 and RAFFLES of 1901. Just as Hornung's brother-in-law, Conan Doyle, had killed off Sherlock Holmes in 1894 only to "revive" him for a 1902 reminiscence titled THE HOUND OF THE BASKERVILLES, so Hornung killed off Raffles (as a soldier seeking atonement in the Boer War) at the end of RAFFLES, only to have his sidekick Bunny continue with these reminiscences four years later. This American edition, with a handsome binding showing a silhouetted horse and landau, includes ten full-page plates by Cyrus Cuneo -- whereas the English edition contains only a frontispiece. Condition is very good-plus (scarcely any wear other than the almost-unavoidable flaking of some of the white pigment on the front cover). (Inventory #: 14528)
$125.00 add to cart or Buy Direct from
Sumner & Stillman
Share this item