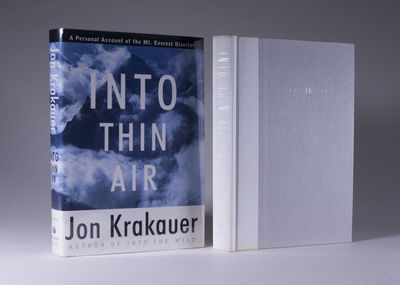 by Krakauer, Jon
Westminster, Maryland: Villard Books, 1997, First Edition. [xx], 293 pp. (1). Black-and-white photographic images and wood cut images, cartographic end leaves. Publisher's gray paper covered boards with half-white cloth on cover and spine, bright silver gilt titles on cover and spine — all in Fine condition. Dust jacket is unclipped and in Fine Condition. Internally fresh with no prior ownership markings, no folds or tears, appears to be an unread and seldom handled complete copy.
Into Thin Air is the first person account of the deadliest season in the history of Mount Everest by the acclaimed journalist Jon Krakauer on assignment for Outside Magazine to report on the growing commercialization of the mountain. As an accomplished climber, Krakauer journeyed to the Himalayas as a client of Rob Hall, one of the most respected high-altitude guides in the world. Hall had summited Everest four times between 1990 and 1995 and had led thirty-nine climbers to the top. Ascending the mountain in close proximity to Hall's team was a guided expedition led by Scott Fischer, a forty-year-old American with legendary strength and prolonged endurance who had climbed the peak without supplemental oxygen in 1994. Neither Hall nor Fischer survived the unexpected storm that struck in May 1996.
Krakauer examines what it is about Everest that has compelled so many people to throw caution to the wind, ignore the concerns of loved ones, and willingly subject themselves to such risk, hardship, and expense. Written with clarity, Krakauer's first person account of what happened on the roof of the world is engaging and very memorable read. (Inventory #: NTTX619JC.40)
$500.00 add to cart Available from
Chet Ross Rare Books
Share this item
Chet Ross Rare Books
Offered by

Boston : Houghton, Mifflin & Co. , 1883
(click for more details about Voyage of the Jeannette The Ship and Ice Journals of George W. Delong, Lieutenant-Commander U.S.N., and Commander of the Polar Expedition of 1879-1881)
View all from this seller>