Treasury Secretary Wolcott Writes To Speaker Of The House Dayton During The Xyz Affair: “The Sickness In Portsmouth, Boston, New York & Philadelphia Will Unavoidably Delay The Public Operations…The Stagnation Of Business Will Deprive Me Of The Aid Expected To Be Derived From Credit…The Attention Of France Turned To The East & The Villains Succeed In Destroying The Independence Of European Nations, Our Turn Must However Come” 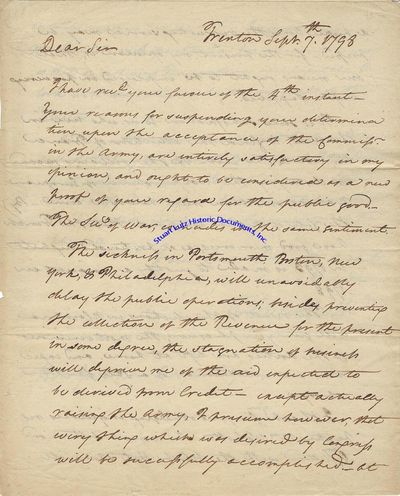 signed
by OLIVER WOLCOTT, JR.
OLIVER WOLCOTT, JR. (1760-1833). Wolcott, the son of the Signer, was the second Treasury Secretary who remained in the Adams administration. He negotiated the end of the XYZ Affair. JONATHAN DAYTON (1760-1824). Dayton, a politician from New Jersey, was the youngest Constitution Signer, a Senator and the third Speaker of the House of Representatives. THE XYZ AFFAIR. During the mid-1790s, France and England were at war, and the United States declared its neutrality. At the same time, the United States stopped paying its war-time debt to France, declaring that it owed its money to the Bourbons, not the Republic of France. In 1796, France began seizing American ships, especially if they were trading with England. Three American diplomats, Charles Cotesworth Pinckney, Elbridge Gerry and John Marshall, went to France to negotiate in July 1797. Agents of the French Foreign Minister Talleyrand demanded bribes before starting negotiations; the Americans refused. By the summer of 1797, the French had taken over 300 American ships in the previous year; the next year, the conflict grew into the XYZ Affair / Quasi-War. In March 1800, President Adams decided to end hostilities with France, and sent William Vans Murray, Oliver Ellsworth and William R. Davie to Paris to negotiate a treaty. A basic convention was signed in Paris on September 30, 1800, and then was returned to Washington for approval. ALS. 3pg. 8” x 10”. September 7, 1798. Trenton [New Jersey]. An autograph letter signed “Oliv Wolcott” as Treasury Secretary to the Speaker of the House Jonathan Dayton: “I have received your favour of the 4th instant – your reasons for suspending your determination upon the acceptance of the Commission in the Army are entirely satisfactory in my opinion, and ought to be considered as a new proof of your regard for the public good. The Secy of War coincides in the same sentiment. The sickness in Portsmouth, Boston, New York & Philadelphia will unavoidably delay the public operations; besides preventing the collection of Revenue for the present in some degree, the stagnation of business will deprive me of the aid expected to be derived from Credit – except actually raising the Army, I presume however that every thing which was desired by Congress will be successfully accomplished. At a proper time the recruiting service may be pressed in for the present, my opinion is, that our means ought to be employed in procuring ample supplies. It is some satisfaction to us, who live in the West, to find the attention of France turned to the East & the villains succeed in destroying the independence of European Nations, our turn must however come. But the fate of matter we find that the French have good memories, as a pretended neglect in 1793, is made to justify a conquest in 1798. The result of the elections in N Carolina will give you pleasure; the most venomous of the antics are left at home…”. The letter is in fine condition. (Inventory #: 4900)
$750.00 add to cart Available from
Stuart Lutz, Historic Documents, Inc.
Share this item