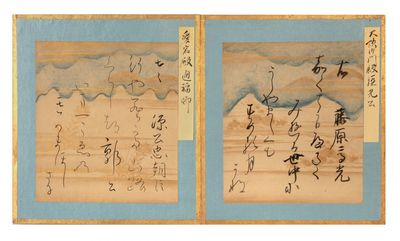 by TEKAGAMI JO
Small thick 4to accordion album (187 x 167), covers of orig. gold silk brocade (kinran), with 36 exquisite examples of fine calligraphy mounted on blue boards, finely painted silk endpapers. [Japan: written early Edo; album assembled, we believe, late Edo]. Albums of exemplary calligraphy specimens, referred to as tekagami, or "mirrors of the hand," demonstrate the high esteem in which the art of brush writing has been held in Japan, as in East Asia more generally. Such albums, which bring together fragments cut from handscrolls or bound booklets, also served as models of different brush-writing styles for students of calligraphy. The practice of creating such compendia became popular in the sixteenth and seventeenth centuries, with connoisseurs of calligraphy pasting labels attempting to identify the calligrapher alongside a fragment. Our album contains a collection of 36 calligraphically executed poems of the "36 Immortal Poets," written by a series of aristocrats, all from the 17th century. Each poem has been written on highly decorated square "poem cards" (shikishi) and mounted on gold-bordered pale blue boards. The textured paper for the poems is very beautiful, subtly decorated with underpaintings in gold "mist" and various gold plant and flower motifs using kindei ("golden mud") as the pigment. These patterns, known as shitae, were made on the leaves before they were written or painted on. Each card has further backgrounds of blue-gray clouds. The calligraphy on the 36 poem cards (each 142 x 126 mm.) reveals a wide range of styles. By each card, there is another slender pasted-in slip of gold-decorated paper identifying the calligrapher. They include Higashizono dono Motokata kyo (d. 1704), Takatsukasa dono Kanehiro kyo (1659-1725), Otagi dono Michitomi kyo (1634-99), Konoe dono Motohiro kyo (1648-1722), Iwai dono Yukitoyo kyo (1653-1713), Daigo dono Fuyumoto kyo (1648-97), Karasumaru dono Mitsuo kyo (1647-90). The beautiful silk endpapers have been painted with images of young pine trees and violets, again with a gold mist in the background. In very fine condition, preserved in an old wooden box. The final poem card has a small wormhole. (Inventory #: 7080)
$4,500.00 add to cart or Buy Direct from
Jonathan A. Hill, Bookseller
Share this item
Jonathan A. Hill, Bookseller, Inc.
Offered by