Laughter in the Dark (Three original screenplays for the 1969 film) 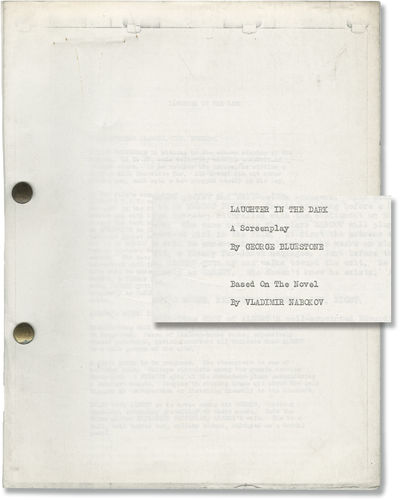 The first script is an undated draft script by screenwriter George Bluestone, who previously adapted Winston Graham's 1967 novel "The Walking Stick," for the 1968 Eric Till film, with copied annotations throughout, striking, adding, and adjusting dialogue.

The second is a Second draft script, dated 1st April, 1968, by novelist, playwright and screenwriter Derek Marlow, with copied annotations striking scenes or pages on nearly every page. Marlow said in an interview that he was asked by director Tony Richardson which book he'd like to adapt for a screenplay, and Marlow suggested Nabakov's "Laughter in the Dark." Two or three months afterward Marlow received a call from Richardson asking him to write the adaptation.

At the time Richard Burton was to star alongside Marianne Faithfull. Marlow then went to the US to promote his 1968 novel "Memoirs of a Venus Lackey," and upon his return to the UK, found out a new screenplay by Edward Bond had been written, and Burton and Faithfull had been replaced.

The third is a draft script, dated 24th June 1968, by Edward Bond. IMDB shows the filming date as starting June 1968, thus likely a draft used early in the production. The first half of the script (to page 66) is on pink paper with the remainder on green paper, with no revision date change.

Based on the 1932 novel by Vladimir Nabokov, updating the original 1930s Berlin setting to 1960s swinging London, about a wealthy art dealer who is seduced and swindled out of his fortune by a young woman and her lover.

Set in London and the Riviera, shot on location in Spain, France, and the United Kingdom.