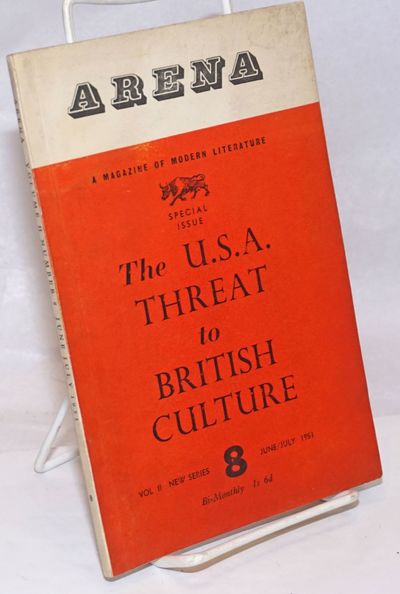 by Lindsay, Jack, editor
London: the bimonthly, 1951. 56p., 8.25 x 5.25 inch journal wraps; wraps worn and soiled, foreedges foxed, a few small stains on rear wrap else good condition. "Needless to say..the threat comes from the reactionary elements now dominant in U.S.A. society, and there is no question of an attack on American culture as such. The elements in the U.S.A. which threaten our tradition are at the same time destroying the best traditions of American society.. All blows struck here in Britain or elsewhere against the synthetic imperialist culture of the States, coldly and cynically devised for the debasement of man, is also a blow in defence of the U.S.A. common man.." This entire issue of Arena consists of reports given at an April 29th conference held under auspices of the communist party of Great Britain. W.E.B. DuBois' contribution, a talk entitled "I take my stand," possibly the first appearance in print. Besides DuBois, other big name contributors are E. P. Thompson, Rose Grant, and Howard Fast. (Inventory #: 251410)
$12.00 add to cart or Buy Direct from Bolerium Books
Share this item