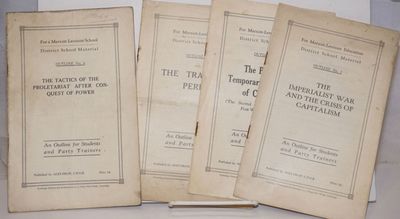 [London]: AGIT-PROP, C.P.G.B., 1930. Four outlines from the series, Nos. 3, 4, 5, and 6; 14, 15, 16, and 22p. respectively, stapled wraps, 5.25 x 8.5 inches, wraps worn and soiled with some small stains, staples heavily rusted, rust stains throughout, No. 6 with pencil notation on front wrap, over all reading copies only. Titles are "The Imperialist War and the Crisis of Capitalism", "The Period of Temporary Stabilization of Capitalism (The Second and Third Periods of Post-War Capitalism)", "The Transition Period", and "The Tactics of the Proletariat After Conquest of Power". All have the subtitle "An Outline for Students and Party Trainers (Inventory #: 251423)
$20.00 add to cart or Buy Direct from Bolerium Books
Share this item