[ALIEN REGISTRATION CERTIFICATE OF IDENTIFICATION FOR A YOUNG JAPANESE ISSEI IN LOS ANGELES IN 1942, ACCOMPANIED BY AN INDEFINITE LEAVE LETTER FROM CAMP AMACHE] 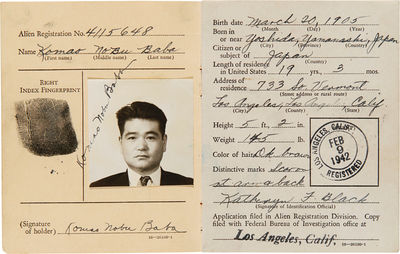 by [Japanese-American Internment]: Baba, Komao Nobu
Los Angeles, 1942. 3pp., plus a partially-printed letter, signed, laid in. 16mo. Original pink paper wrapper, partially printed and completed in manuscript, and additional thick card printed covers. Small tape repair at bottom edge of front wrapper, newspaper clipping affixed to last page. Very good. A sobering document of the Japanese-American internment period. This Alien Registration ID card belonged to Komao Nobu Baba who was born in Japan in 1905, but had lived in the United States for nineteen years by the time the ID card was mandated and issued. The document lists Baba's date and place of birth, notes his citizenship as "Japan," gives his length of American residence, address, height, weight, hair color, and distinctive marks. The facing page lists Baba's Alien Registration No. as 4115648, his full name, and includes his right index fingerprint and a small passport-style portrait photograph of him. On the last page of the document, Baba has tipped in a small newspaper clipping listing the U.S. District Attorney for Los Angeles, the Director of the Immigration Service, the Alien Registration Division office, and the FBI (likely printed in some publication as a guide to Japanese Americans who were being forcibly evacuated in early 1942). Baba, who lived on Vermont Avenue in Los Angeles, was assigned to the Granada Relocation Center (aka Camp Amache) in Colorado, evidenced by a partially-printed letter, signed, laid into the Alien Registration card. The form letter is titled, "War Relocation Authority Alien's Indefinite Leave." The document grants Baba, "an alien of Japanese nationality residing in Block No. 10E- 1A" indefinite leave from Granada Relocation Area on May 5, 1943 in order to travel to Camp Savage in Minnesota. The letter is signed by the project director at Granada, James G. Lindley. Baba was most certainly sent to Camp Savage to participate in the United States Military Intelligence Service's language school, which moved from San Francisco to Minnesota in June 1942. At the language school, both Issei and Nisei men were trained to translate captured documents, assist in interrogations of Japanese war prisoners, serve as interpreters for American military units, and help the American war effort however their language skills might do so. Little else is known of his wartime service, but unlike a great deal of Japanese Americans sent to Minnesota, Komao Nobu Baba returned to California after the war. He died in San Francisco on Sept. 4, 1958, age 53, and is buried at Cypress Hill Memorial Park in Petaluma. The present document stands as a sad reminder that his short life was decidedly more difficult than it should have been. (Inventory #: WRCAM55530)
$1,250.00 add to cart or Buy Direct from
William Reese Co. - Americana
Share this item