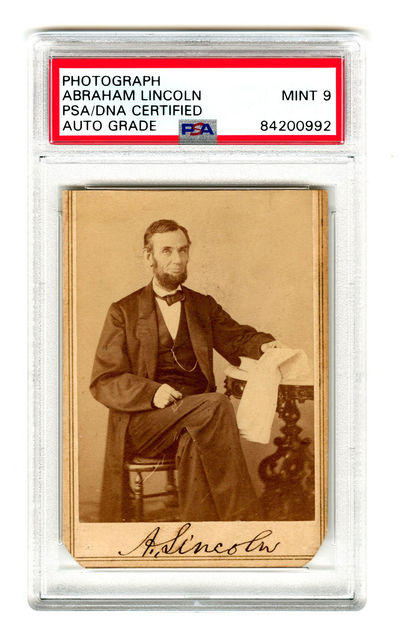 signed
A Superb Abraham Lincoln Signed Photo Authenticated, Slabbed, and Graded Mint 9 by PSA - A Resolute President, One Month After the Union Victories at Gettysburg and Vicksburg

Lincoln in Photographs: An Album o

On Thursday, August 6, in accordance with a proclamation issued by Lincoln, a day of thanksgiving and prayer was observed throughout the North in the wake of recent important Union military successes at Gettysburg and Vicksburg. In this well-known portrait by Gardner, Lincoln is seated at an ornate circular table, his legs crossed, holding a newspaper in his left hand, his reading glasses in his right. His expression - especially in the lines about his mouth - is resolute and determined. According to John Hay, who accompanied the President to Gardner's studio, Lincoln "was in very good spirits" that day. The images of Lincoln by Gardner that day are the first photographs taken in Gardner's new studio. Lincoln had promised Gardner to be the first to sit for a portrait, and decided on a Sunday visit, in order to avoid curiosity seekers and onlookers in the streets of the capital.

John Tyler Rare ALS as VP, Only 2 or 3 Others Have Sold Dated in this 30 Day Period


(click for more details about John Tyler Rare ALS as VP, Only 2 or 3 Others Have Sold Dated in this 30 Day Period)


(click for more details about Declaration Signer T. McKean and Constitution Signer J. Ingersoll Rare Broadside, "Electors of a President and Vice President of the United States")
View all from this seller>